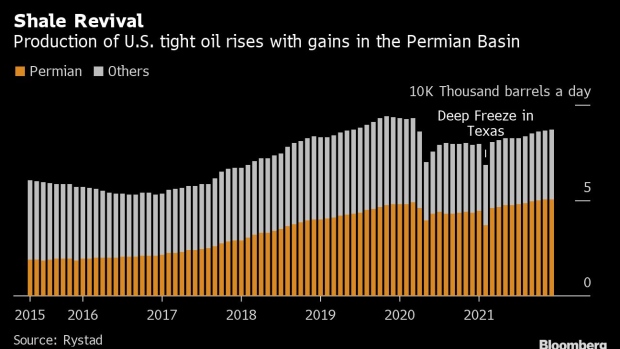 (Bloomberg) -- Surging oil and natural gas prices are spurring production increases from West Texas to the Upper Great Plains that probably will lift output to levels not seen since the early days of the pandemic, according to Rystad Energy AS.

U.S. shale-oil production is expected to reach 8.68 million barrels a day in December, which would be the highest since March 2020, analyst at the Oslo-based research house said. Meanwhile, nationwide gas output is on its way to a 6-year high.

In the Permian Basin, crude production is expected to rise to 5.043 million barrels a day this month, which would be the most in data going back to 2015, according to Rystad.

U.S. oil prices surged more than 65% this year as economies emerged from lockdowns and OPEC and allied producers stuck to output limits despite pleas from President Joe Biden to boost exports.

Gas is up almost 90% during the same period amid robust domestic and overseas demand, and energy crises in Europe and Asia that have rippled across global markets.

American shale-oil production still lags levels seen in 2019 and the ongoing gains may be slowed as inflation and labor shortages hinders growth prospects.