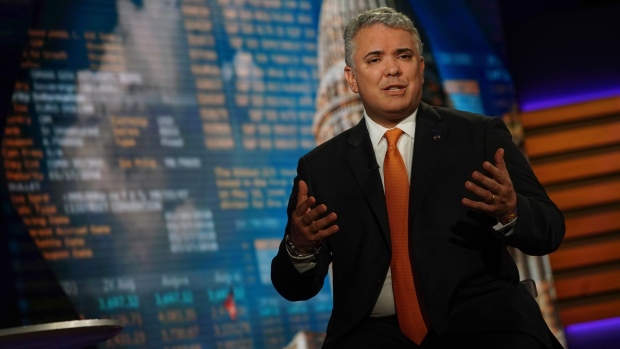 Ivan Duque, Colombia's president, speaks during a Bloomberg Television interview in New York, U.S., on Thursday, Sept. 23, 2021. Duque said Colombia is "open for business" and wants to be the first destination for foreign direct investment from the United States. , Bloomberg

(Bloomberg) -- Colombian President Ivan Duque called for the U.S. to continue imposing sanctions on Venezuela’s government until there is “a clear transition to democracy” in that country.

In an interview at Bloomberg’s New York headquarters on Thursday, Duque denied that U.S. policies, which greatly restricted Venezuela’s ability to sell its oil and import gasoline, have contributed to the migration crisis engulfing Colombia.

Venezuela’s economy will contract for an 8th straight year in 2021, according to a forecast by the International Monetary Fund, in one of the deepest slumps in world history. Venezuelan economist Francisco Rodriguez, a fellow at the Council of Foreign Relations, estimates that economic sanctions are responsible for about half of the drop in output since they were first imposed in 2017, worsening the humanitarian crisis without dislodging the government of President Nicolas Maduro.

Colombia is now home to about 2 million of the more than 5 million Venezuelans who have fled their country in recent years.

Talks between the Maduro government and the opposition aimed at ending the country’s political and economic crises are set to resume Friday in Mexico. Duque said he is “not an optimist at all” that these talks will yield good results.

“The only thing that can work at this moment is to make sure that there’s going to be a rapid call for a presidential election in Venezuela that has strong international scrutiny, so that it guarantees transparency, and the outcome is the transition to a vibrant democracy,” Duque said.