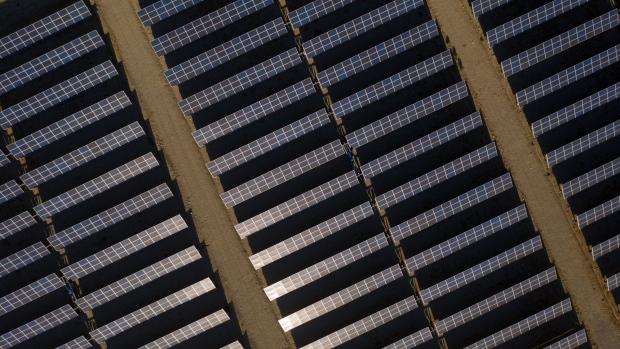 Photovoltaic panels at the North Palm Springs 1 solar field in Whitewater, California, U.S., on Thursday, June 3, 2021. Communities from California to New England are at risk of power shortages this summer, with heat expected to strain electric grids that serve more than 40% of the U.S. population. , Bloomberg

(Bloomberg) -- A leading U.S. solar industry group is warning that expanded tariffs -- if imposed by the Commerce Department -- would crimp installations at a time when the Biden administration is pushing to significantly boost sun-based power.

The Solar Energy Industries Association estimates that potential duties on some imports from Malaysia, Vietnam and Thailand would increase costs and could depress installations by almost a third below prior forecasts for 2022 and 2023, according to a presentation Monday from the Washington-based trade group.

Fewer deployments could complicate the Biden administration’s push to combat climate change, which depends on a huge burst of solar power. A recent study from the U.S. Energy Department found that solar could power 40% of the country’s electricity by 2035.

In August, a group of anonymous solar manufacturers filed petitions asking Commerce to extend tariffs to China-linked factories in Vietnam, Malaysia and Thailand, America’s largest panel suppliers. The U.S. depends on imports for the majority of its solar panels.