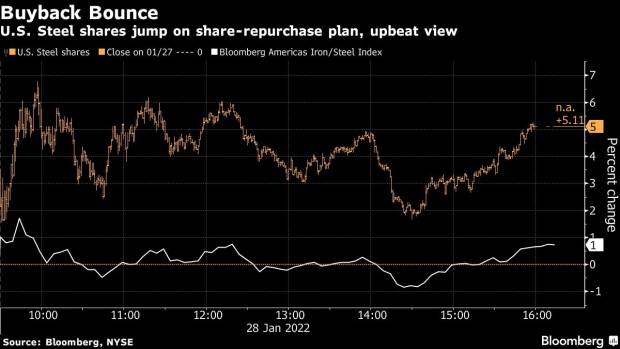 (Bloomberg) -- U.S. Steel Corp.’s boss says those betting on a further drop in steel prices are likely to be disappointed.

Chief Executive Officer David Burritt doesn’t envisage domestic steel prices returning where they were in August, when they hit almost $2,000 per ton -- they’re currently at $1,170 - but he does think the long-term average will be much higher compared with the past decade.

“I don’t know if I see a comeback -- I’m not the best speculator on this stuff,” he said Friday in an interview. “Prices will be maintained at a level where we can have superior performance.”

The steelmaking industry in the U.S. saw one of its most profitable years ever in 2021, but it’s facing questions over the robustness of demand in the face of supply-chain disruption, which has affected consumers.

The CEO of Canadian steelmaker Stelco Holdings Inc. said last week that the North American steel market is a “falling knife,” with demand shrinking as supplies become more plentiful. Analysts at BMO Capital Markets have said U.S. Steel is bumping up against falling prices, while analysts at Wolfe Research said they’ve heard customers are cancelling orders, and that steel industry activity will decline the first quarter.

Burritt cited order backlogs for his more optimistic view, and pointed to pent-up demand from industries like appliances and automobiles, which are prevented from manufacturing at full capacity because of a chip shortage.

His comments come a day after the Pittsburgh-based steelmaker announced a plan to buy back $500 million of its shares. The stock closed 5.1% higher at $19.54 on Friday.

Burritt is working to shift U.S. Steel’s focus from traditional integrated metal production -- a technology that dates back to the days of Andrew Carnegie -- to electric arc furnaces that remelt scrap metal. In recent years the company has idled capacity at its traditional Great Lakes plant in Michigan and a blast furnace at Granite City, Illinois.

The company has said the idled Granite City furnace remains too uncompetitive to justify a restart. The plant garnered national attention a few years ago when then-President Donald Trump credited his tariffs for allowing U.S. Steel to restart a blast furnace there.

“I’m not suggesting that Granite City is going away anytime soon, especially with prices like this, but that’s how we think about it,” Burritt said. “Everybody has to compete.”