U.S. stocks fell on the week for the first time in a month as accelerating inflation raises concern about the sustainability of the economic expansion. Treasury yields fell for a three consecutive week.

“Investors are thinking about what’s next. This is where those cross currents are,” said Brent Schutte, chief investment strategist at Northwestern Mutual Wealth Management Co. “Earnings have been strong, but there’s still an uncertainty about what happens going forward.”

Stocks erased an earlier gain Friday after a report showed the University of Michigan’s preliminary sentiment index decreased to 80.8 in July from 85.5 the prior month. The figure was lower than all estimates in a Bloomberg survey which had a median projection of 86.5.

Investors had turned their attention to corporate earnings, with optimism over resurgent consumer demand tempered by the spread of the coronavirus delta variant. The outlook for stocks was held up by repeated assurances this week from Federal Reserve Chair Jerome Powell that the post-lockdown surge in inflation didn’t yet warrant a tapering of stimulus. 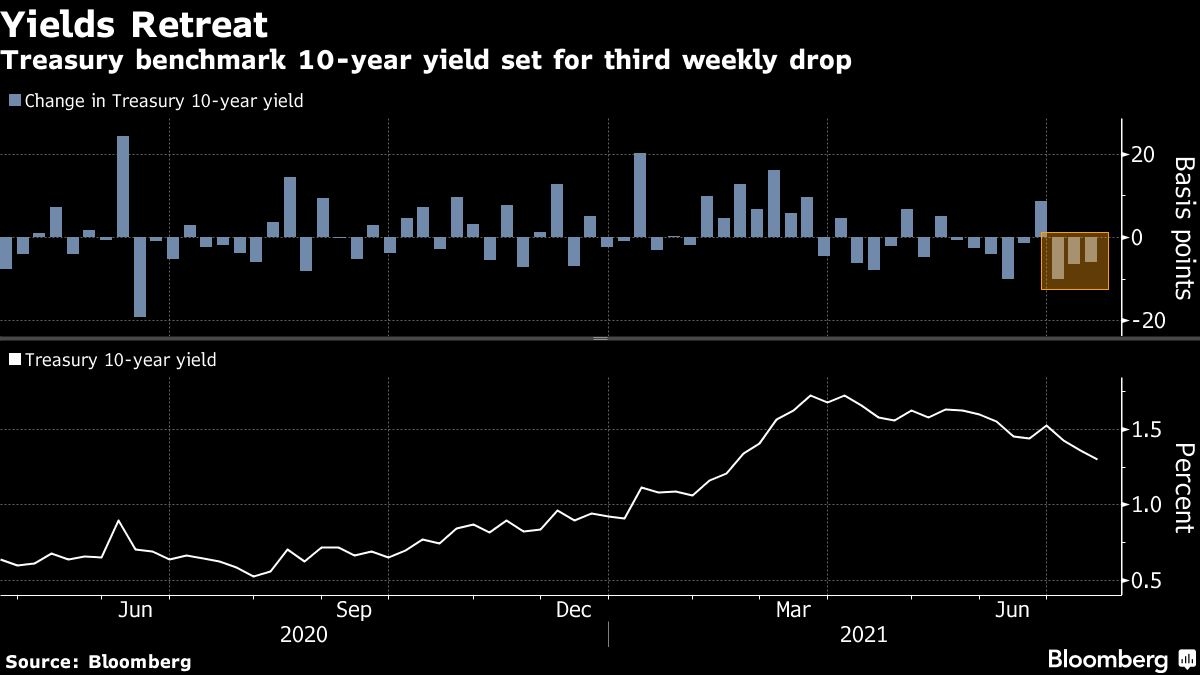 Powell defended the central bank’s accommodative stance for a second time in two days on Thursday in his testimonies to lawmakers. The Fed’s stance underscores a growing divergence among global central banks on their response to growing price pressures. Policy makers from New Zealand to Canada and the U.K. are turning hawkish, making investors wonder how long could the Fed afford to remain dovish.

“Jerome Powell said that the recovery still had a way to go,” said Fiona Cincotta, senior financial markets analyst at City Index. “This is movement in the right direction.”

Oil posted its biggest weekly loss since mid-March as markets face the prospect of extra supplies from the OPEC+ coalition, as the United Arab Emirates and Saudi Arabia repair a rift that has stymied the group’s decision-making process. A stronger dollar has also dimmed the appeal of commodities priced in the U.S. currency this week.