U.S. stocks dropped from all-time highs as investors mulled the consequences of a drop in retail sales and an uptick in producer prices while the Federal Reserve holds a two-day policy meeting. Crude oil traded at the highest level since 2018.

The real estate and technology sectors weighed on the benchmark S&P 500 index, which snapped a three-session winning streak. Exxon Mobil and Chevron lifted the energy sector with oil rallying. The Treasury 10-year note yield lingered near 1.5 per cent for most of the day after Commerce Department figures showed retail sales declined in May.

“After nearly a year of anti-climactic FOMC meetings, tomorrow’s meeting has the potential to move markets because it will likely start the process of the Fed communicating tapering of this historic accommodation,” wrote Tom Essaye, a former Merrill Lynch trader who founded “The Sevens Report” newsletter. “That’s going to be a tricky minefield for the Fed to navigate.”

The prevailing mood was calm for much of the day before the Fed’s next policy decision -- and possible hints about when the central bank will slow the pace of emergency asset purchases. The statement is set to include updated forecasts, and expectations are that officials would broadcast any taper plans well in advance. 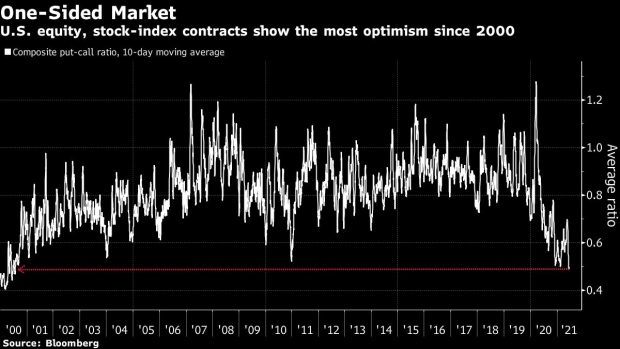 “The one show in town this week is the Fed, so investors have been weighing the possibility of whether the Fed will start to introduce the theme of reining in this ultra loose policy,” said Fiona Cincotta, senior financial markets analyst at City Index. “That’s the big question -- will they introduce that debate or will they let it push over until August?”

Economists expect the so-called dot plot to point to an interest-rate increase in 2023, while the bank is unlikely to signal a scaling back of bond purchases until later this year.

Elsewhere, European equities were led higher by chemical firms, while Asian stocks were mixed. West Texas Intermediate crude traded around US$72 a barrel as investors weighed the outlook for rising demand against extended anti-virus curbs in some economies.

Bitcoin continued to gyrate amid a barrage of comments, briefly climbing above US$41,000 only to pull back.