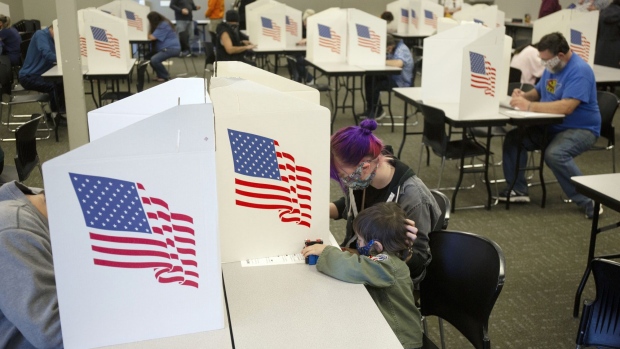 Voters wearing protective masks cast ballots at a polling location for the 2020 Presidential election in Des Moines, Iowa, U.S., on Tuesday, Nov. 3, 2020. American voters, at least those who've not yet cast ballots, go to the polls Tuesday to choose between President Donald Trump and Democratic nominee Joe Biden and cast votes in U.S. House and Senate races and state and local elections. Photographer: Rachel Mummey/Bloomberg , Bloomberg

(Bloomberg) -- U.S. equity futures pointed to further gains after the biggest two-day rally since September, as investors speculated Congress will deliver a spending bill once the election is decided.

December contracts on the S&P 500 rose 0.7% as of 6:16 p.m. in New York. The cash index jumped 3% in the past two days. Polls in the earliest battleground state close at 7 p.m. New York time, while Florida and Pennsylvania accept votes until 8 p.m. Final polls taken before voting began Tuesday showed Democrat Joe Biden with a solid lead nationally over Republican Donald Trump, adding to speculation a winner could be declared within hours of the final polls closing.

Markets have been volatile during the final weeks of the campaign as investors fretted over the potential for a contested outcome, a surge in coronavirus cases and stretched valuations that make megacap tech shares look expensive as the economic rebound starts to slow. The S&P 500 has moved at least 1% six of the past seven sessions. Biden’s solid lead has some investors speculating there’ll be a relatively quick decision on who will prevail, removing a major level of uncertainty.

“Most real investors are sitting on their hands waiting to see what happens with the election,” said Matt Maley, Miller Tabak + Co.’s chief market strategist. “As long as we can get a relatively quick decision on who wins, the market will get a year-end rally.”

A surge in mail-in ballots has made it more likely that some states won’t be able to declare a winner on Tuesday, exposing markets to a drawn out process for determining the next president.

Adding to anxiety is that markets haven’t always been prescient in knowing what outcome they’d prefer. In 2016, Trump’s perceived recklessness was considered bad news for a stock market that detests uncertainty. Futures plunged the maximum 5% as he took the lead late on Nov. 8, 2016. By morning, as investors warmed to his pledges of cutting taxes and slashing regulations, futures had rebounded higher. The S&P 500 has rallied 57% since his surprise win.

Investors have come around on Biden as his lead solidified, banking on his promise to broker a massive aid package to jumpstart the economy hit by the pandemic. Assets seen benefiting most from a Biden administration have climbed alongside his polling lead. The Invesco Solar ETF, ticker TAN, has surged over 140% in the past six months, buoyed by optimism that Biden would boost infrastructure and green-energy spending.

Hopes of a multi-trillion fiscal aid package has boosted benchmark Treasury yields to the highest level since June, dragging beaten-down shares of financial companies higher as well. Meanwhile, the Nomura-Wolfe Biden Election Basket -- a group of stocks that wagers on potential winners from a Democratic victory while betting against shares seen as losers -- climbed to a record on Monday. The basket holds 30 pair trades across sectors including technology, health care, utilities and others.

But not all outcomes under Biden are considered market-friendly. He also has pledged to roll back the huge tax cuts that Trump handed corporate America back in 2017, a move that, irrespective of the public-policy merits it may have, at least has the potential to create stress for equities. Democrats have also promised tighter financial regulation and will look at how megacap tech companies operate.

Another possibility is that a Biden win is not accompanied by Democrats taking over control of the Senate, leaving Congress divided. That could temper expectations for a spending bill and threaten to stall much of Biden’s platform.

The S&P 500 retreated in both September and October after a torrid summer rally. It closed Tuesday about 6% below its all-time high.

While trades reflecting a Democratic sweep held firm, betting markets aren’t convinced. One gauge slipped to just over 50% odds of the so-called Blue Wave -- that Democrats oust Trump and take Congressional majorities. Traders hedged prospects of post-vote volatility, driving a measure of expected swings in China’s yuan to its highest level in more than nine years.