Over the course of the next 12 months energy will be the best performing sector: Art Hogan

Stocks finished the week on solid footing, with traders assessing whether an inflation slowdown could soon make the Federal Reserve reduce the pace of its most-aggressive tightening campaign in decades and prevent a hard landing.

Defying the crowd of skeptics who dubbed the rebound a bear-market rally or short-covering, the S&P 500 had a fourth straight week of gains, the longest such run since November. The gauge recouped more than 50 per cent of the losses it notched between its January peak and June nadir, and approached its 200-day average -- a line crossed by the Russell 2000 of small caps. The Nasdaq 100 pushed further beyond its technical bull-market threshold, following a surge of over 20 per cent from June lows.

As equities climbed, Wall Street’s fear gauge crumbled. The Cboe Volatility Index slumped back below 20, the average level since its inception. The VIX notched its eighth straight week of declines, the longest losing stretch since 2019. Meantime, the S&P 500’s 14-day relative strength index (RSI) topped 70 -- which is seen by some traders as one indication of an overbought market.

The next few weeks will be crucial in determining the sustainability of the rally. With the earnings season almost over, economic reports mixed at best and many Fed speakers unwillling to sound too dovish, some analysts see the chances of a breather. To Matt Maley at Miller Tabak, stocks are indeed getting overbought on a very-short-term basis, so a decline or sideways move “would not be the worst development in the world.”

For now, flows have been robust. Global equity funds lured US$7.1 billion in the week through Aug. 10, Bank of America Corp. strategists led by Michael Hartnett wrote, citing EPFR Global data. Bond funds had an intake of US$11.7 billion, while US$4.3 billion was pulled out of cash.

Lindsey Bell, chief markets and money strategist at Ally, said the market’s about to enter what is often considered a “sketchy period.”

“Historically, September and October are notoriously volatile, sometimes featuring big stock market drops,” she wrote. “After a more than 10 per cent rally since mid-June, a bearish seasonal trend is good reason to temper expectations. I expect this market to continue to be reactionary and driven by headlines until we have more clarity on where exactly inflation is headed as we approach 2023.” 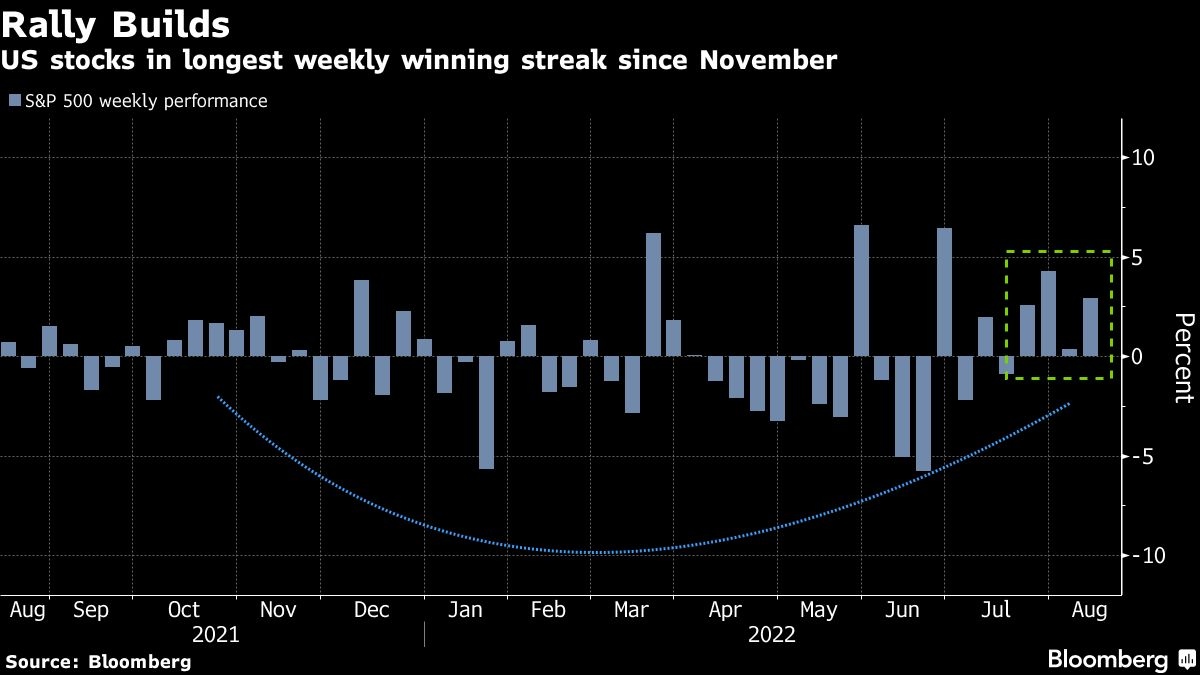 Data Friday showed US consumer sentiment climbed to a three-month high on firmer expectations about the economy and personal finances. Inflation expectations were mixed, with consumers boosting their longer-term views for prices slightly, while reducing their year-ahead outlook for costs.

Fed Bank of Richmond President Thomas Barkin was the latest official to call for continued rate increases, while acknowledging that this week’s inflation figures were encouraging. His San Francisco counterpart Mary Daly told Bloomberg Television that the slowdown in price pressures may mean it’s appropriate for the central bank to slow the pace of hikes to 50 basis points in September-- but noted the fight against inflation is far from over.

“The Fed is unlikely to claim victory until inflation reaches target, but recent data support our view that peak Fed hawkishness is behind us,” Bank of America strategists wrote in a note to clients.