U.S. stocks dropped from record highs, and commodities slumped as investors weighed concerns about a pullback in stimulus and a resurgence in the fast-spreading delta virus variant.

The S&P 500 and Dow Jones Industrial indexes closed lower to start the week, with the energy and real estate sectors leading the declines. Moderna kept the Nasdaq Composite in the green. Treasury yields edged higher and the dollar strengthened. Crude oil touched the lowest in three weeks on concern the delta virus strain will hamper demand growth.

“Most of the sectors within the S&P 500 continue to trade above their long-term averages and while there is some deterioration in the technical picture, stocks still look to see-saw higher through the last dog days of summer, wrote Paul Nolte, a portfolio manager at Kingsview Investment Management.

Federal Reserve Bank of Atlanta President Raphael Bostic said the central bank should move to taper its asset purchases with another strong month or two of employment gains, and proceed with that scaling-back process faster than in past episodes.

“His comments are another trial balloon preparing us for an end-of-year start to tapering,” said Sam Stovall, chief investment strategist at CFRA Research. “Investors in general would prefer a sooner and more drawn-out tapering, than a delayed one that would then require sharper action. The big concern is that a delayed tapering would put the Fed behind the curve -- if they aren’t there already.”

Precious metals also sold off, with gold touching the lowest since March before paring losses. Silver dropped to its lowest since November. Strong U.S. payrolls data on Friday raised the prospect of higher rates, which would make precious metals less attractive relative to other assets.

Asian stocks were mixed, as shares rose in Hong Kong and China and fluctuated in South Korea. The U.S. 10-year Treasury yield climbed to about 1.32 per cent, while the dollar pushed higher. Chinese bond yields gained after inflation data came in above expectations. 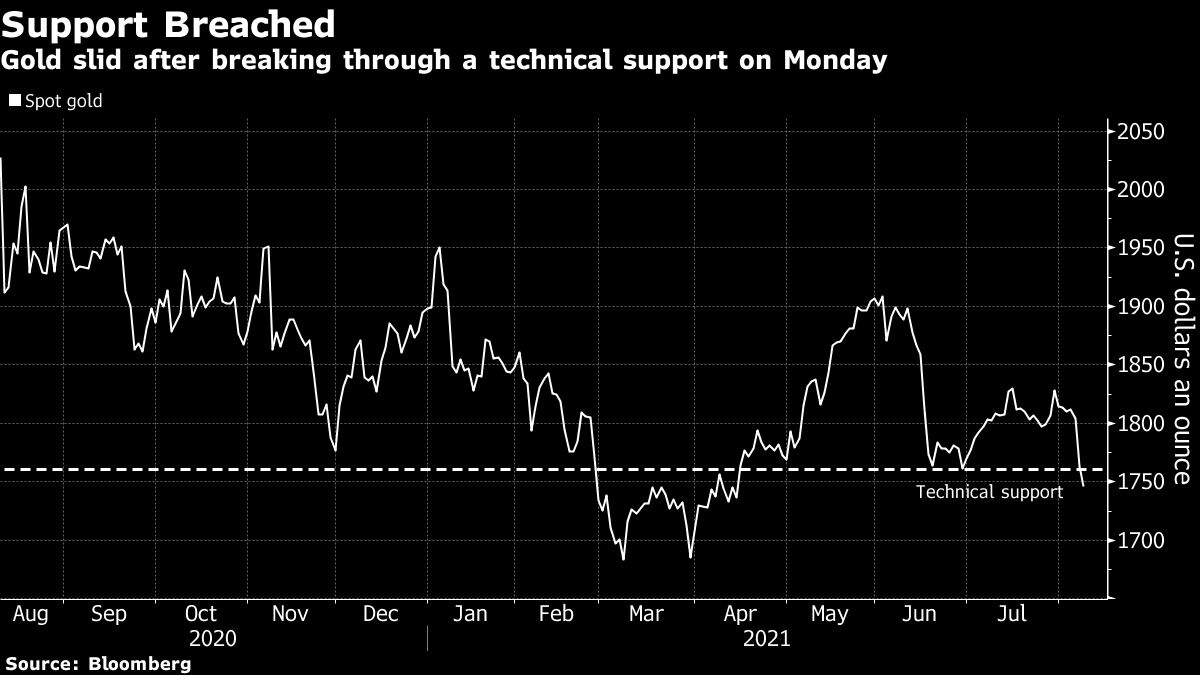 Friday’s payrolls report fanned expectations that the Fed may soon start paring back its massive monetary stimulus. Along with the rampaging delta variant, that’s hitting commodities as investors also keep an eye on rising price pressures. U.S. inflation data later this week will be a key marker ahead of the Jackson Hole symposium later this month.

Elsewhere, Chinese technology shares remained under pressure amid concerns about Beijing’s crackdown. Bitcoin rose to more than US$45,000.