Stock traders took risk off the table at the end of a week that saw recession fears resurface and a hotter-than-estimated inflation reading just a few days before the Federal Reserve decision.

After drifting sideways throughout most of the session, the S&P 500 extended losses in the final hour of trading. Treasury 10-year yields climbed, approaching 3.6 per cent. The dollar wavered.

US short-term inflation expectations unexpectedly declined to the lowest level in more than a year and consumer sentiment picked up, helped by falling gasoline prices. A separate report showed producer prices rose in November by more than forecast, driven by services and underscoring the stickiness of inflationary pressures that supports Fed interest-rate increases into 2023.

“Bottom line: the Fed has already come to terms with the fact that they are likely risking a recession, to anchor inflation longer-term,” said Don Rissmiller at Strategas. “The job is not done. Rate hikes can likely slow down to 50 bp, but we are still looking at policy tightening (and staying tight) in 2023.”

In the run-up to the Fed meeting, all eyes will be on Tuesday’s consumer inflation print — which is forecast to show inflation, while much too high, continued to decelerate. US central bankers, including Chair Jerome Powell, have been signaling a slowdown in the pace of rate hikes while stressing borrowing costs will need to keep rising and remain restrictive for some time to beat inflation.

The Fed is set to keep rates at their peak throughout 2023, dashing hopes markets have priced in for rate cuts in the second half, according to economists surveyed by Bloomberg.

The Federal Open Market Committee’s median projection is expected to show the benchmark peaking at 4.9 per cent in 2023 — reflecting a 4.75 per cent-5 per cent target range — compared to 4.6 per cent seen in September. That would deliver a hawkish surprise to investors — who currently bet rates will be cut by a half percentage point in the second half of next year, though they too see rates peaking around 4.9 per cent. The current range is between 3.75 per cent and 4 per cent.

While many investors are impatient for the Fed to deliver its last rate hike, history shows they should be wary of doing so while inflation remains elevated, according to Bank of America Corp. strategists.

An analysis by Michael Hartnett showed that stocks outperformed after the Fed stopped increasing rates during periods of disinflation in the past 30 years. However, during the era of high inflation in the 1970s and 1980s, equities had fallen after the last hike, they wrote. In the current cycle, they expect the Fed to raise rates for the last time in March 2023.

After analyzing 15 economic downturns going back to 1929, strategists at Bloomberg Intelligence found a strong link between the length of recessions and the time it took the S&P 500 to reclaim its previous high. 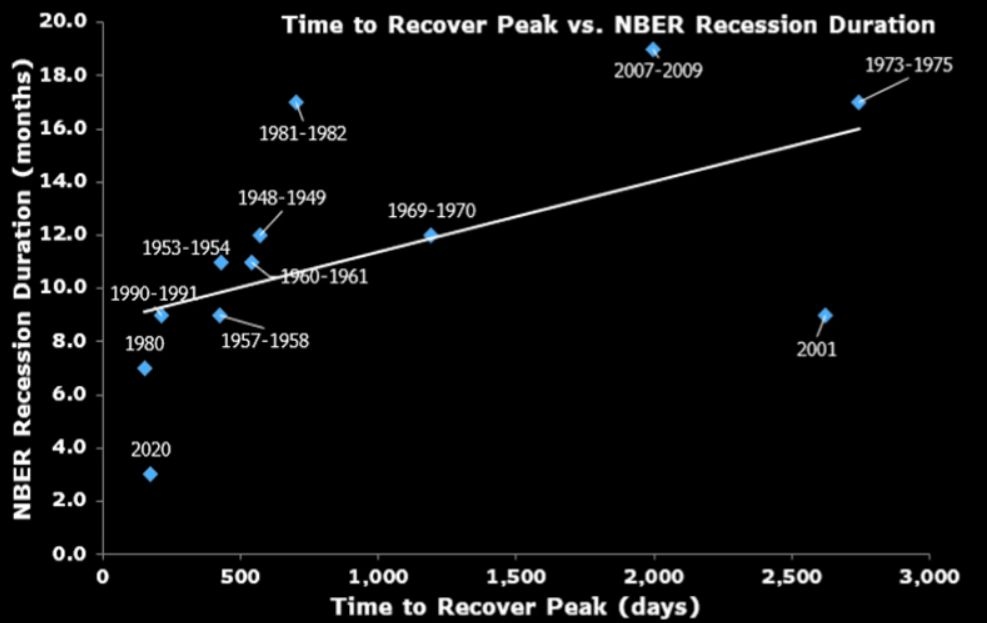 In all instances, it’s taken the gauge about 386 days to reach the bottom and 573 days to recover to peak levels. But if the bottoming process took longer than average, the road to reclaim a previous peak has then lasted 1,997 days, six times the length of the ascents that came after a quicker-than-average bottoming process.

Stocks might be on track for their worst returns since the global financial crisis, but the market has endured the most daily routs in almost five decades, according to data compiled by Bloomberg as of Wednesday’s close. Those selloffs are calculated by a so-called hit ratio that measures the number of gains versus losses as a percentage of the total number of trading days.

That ratio stands at 43 per cent, the S&P 500’s lowest since 1974. An annual hit ratio lower than 50 per cent has only been seen 10 other times in the past 48 years, and the recovery has been painfully slow in most cases

Still, some of the world’s biggest investors predict that stocks will see low double-digit gains next year. Seventy one percent of respondents in a Bloomberg News survey expect equities to rise, versus 19 per cent forecasting declines. For those seeing gains, the average response was a 10 per cent return.