U.S. stocks ended with a slight gain Friday after shrugging off Federal Reserve warnings that there was more policy tightening to come. Oil futures fell on signs that the market is currently awash in supply.

The S&P 500 Index added 0.5 per cent  Friday to finish the week down 0.7 per cent  and the Nasdaq 100 fell 1.2 per cent  in the five-day period. Trading volumes was muted throughout Friday’s US$2.1 trillion options expiration, normally a day when volatility spikes as traders and dealers rebalance their big exposures.

Treasury yields rose again after hawkish comments Thursday from St. Louis Fed President James Bullard, who said interest rates needed to rise at least to 5 per cent -5.25 per cent  to curb inflation. Also on Thursday, Minneapolis Fed President Neel Kashkari said it was an “open question” how far the central bank has to go with rates to bring demand back into balance.

Relentlessly rising interest rates are already weighing on global demand. Growth-sensitive copper and oil prices were set for weekly losses on concerns about a worsening outlook. U.S. crude futures signaled an oversupply for the first time in almost a year. Higher mortgage rates sent sales of previously owned U.S. homes down for a record ninth straight month in October. 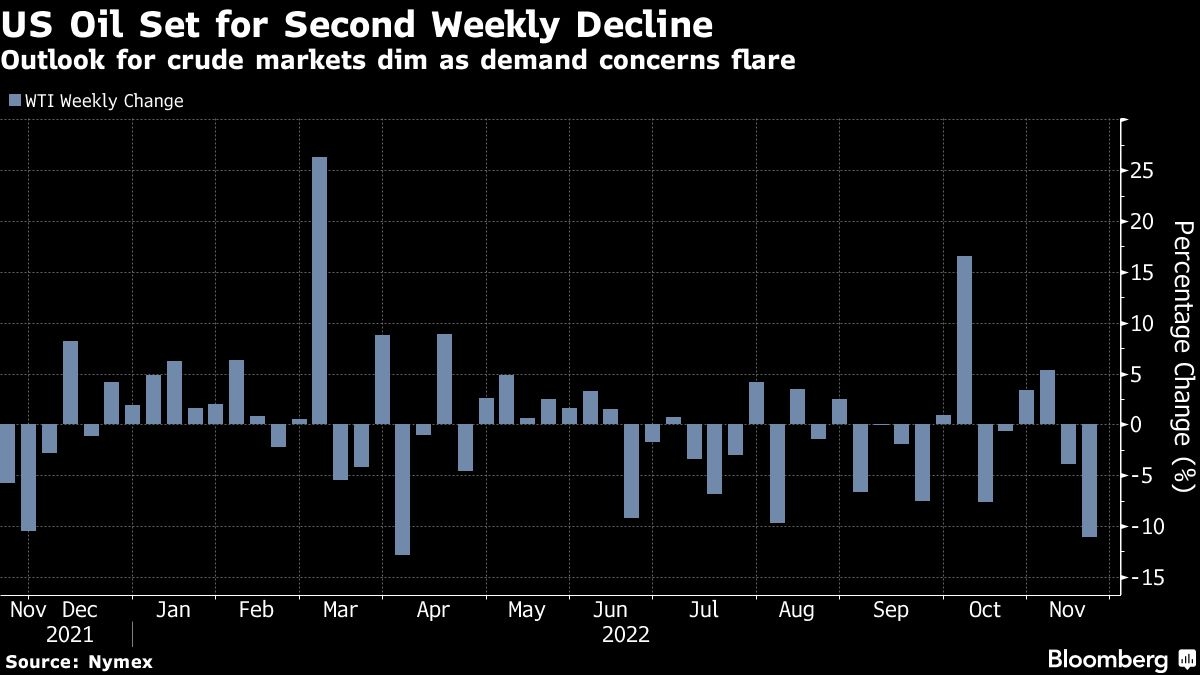 Yet some equity investors said hawkish Fed commentary did not necessarily mean rates would peak at levels higher than previously thought. And traders continued to bet that the Fed will reverse course and begin cutting rates in the later part of 2023.

“The Fed’s steady drumbeat that the campaign to curtail inflation isn’t finished hasn’t fallen on the market’s collective deaf ears,” Quincy Krosby, chief global strategist at LPL Financial, wrote. “Rather the growing evidence that inflation has plateaued has traders and investors alike poised to take advantage of the Fed’s step down to 50 basis points on December 14.”

Despite somber Fed  comments and continued turmoil in the cryptocurrency world, the S&P 500 was headed toward a loss of less than 1 per cent  on the week.

“This week’s somewhat tight range might merely be a ‘breather’ that helps the market digest its recent gains before it heads higher,” Matt Maley, chief market strategist at Miller Tabak + Co., wrote. “Besides, Thanksgiving week tends to be a good one for the stock market.”

Chris Harvey of Wells Fargo expects the market to bounce around the 3,950 level until mid-December, when the next inflation print and Fed decision will provide traders with more clarity. But after that, the market trend will become “a ‘coin toss,’ with increasing evidence of an impending recession,” his team wrote in a note.

Hong Kong’s benchmark Hang Seng Index enjoyed a third straight week of gains, thanks to China’s steps to support the property sector and ease Covid restrictions. European stocks climbed on optimism over both China and bets that central banks will slow their rate hikes.