Stocks retreated after a three-week rally, with a gloomy forecast from Nvidia Corp. weighing on tech shares and traders awaiting inflation data for clues on the pace of Federal Reserve rate hikes.

The S&P 500 erased gains that reached 1 per cent earlier in the day, while the Nasdaq 100 underperformed after an advance that briefly drove the tech-heavy gauge 20 per cent above its June low. Nvidia tumbled almost 6.5 per cent, dragging down chipmakers. Treasuries climbed.

Mounting risks to growth have sparked earnings downgrades, and after recent figures showed gross domestic product shrank for a second straight quarter, some strategists have warned that cuts are only set to ramp up. Friday’s blowout jobs report spurred JPMorgan Chase & Co. and Evercore ISI to say bigger US rate hikes are now in store this year, with Citigroup Inc. seeing a risk of a 1 percentage-point hike in September.

“The economy still has to digest all this tightening and that will materially slow things,” wrote Tom Essaye, a former Merrill Lynch trader who founded The Sevens Report newsletter. “That hasn’t even really started to occur yet, so celebrating the resilience of earnings and economic data when we’re still in an expanding economy (regardless of the GDP prints) seems to be the equivalent of a coach declaring victory because the game plan should work.”

Morgan Stanley’s Mike Wilson, who correctly predicted this year’s equity selloff, called the recent rebound a “bear-market rally” amid growing fears of a recession. While he believes inflation has peaked and “will probably fall faster than the market currently expects,” that still doesn’t bode well for stock markets as it’ll reduce operating leverage and weigh on company earnings, he said. 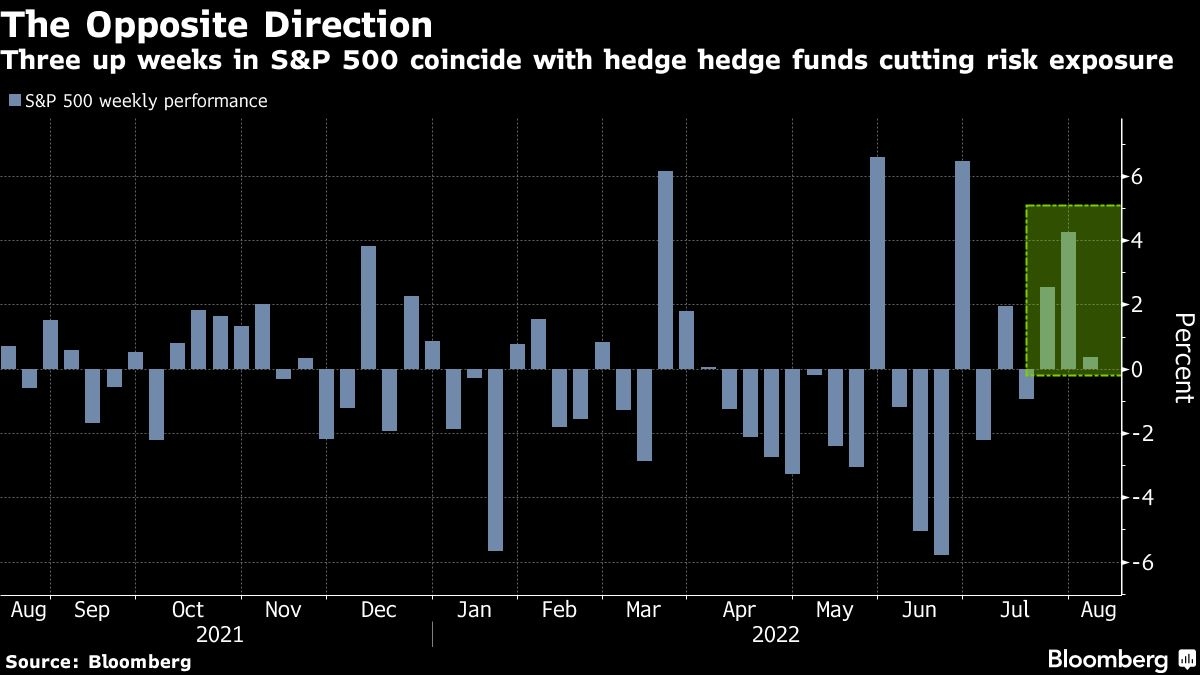 That highlights a sentiment gap between professional speculators displaying a risk-off mood amid uncertainty about the aggressive pace of rate hikes and price action in the stock market, which seemed to reflect a takeaway from Fed Chair Jerome Powell’s press conference that monetary officials will taper the size of rate hikes if growth crumbles.

“Countertrend rallies are characteristic of secular bear-market downtrends, and from that perspective, 2022 has been remarkably similar to previous bear markets in history,” said Seema Shah, chief global strategist at Principal Global Investors. “Until inflation abates and the Federal Reserve rebalances its priorities away from inflation and toward growth, tempting rallies are likely to remain unsustainable.”

Consumer expectations for US inflation over the coming years declined sharply in the latest survey by the Fed Bank of New York, with a recent drop in gasoline prices playing a big part in those results and likely contributing to a lower headline rate of inflation for July when the Labor Department releases the data on Wednesday. Still, almost all inflation measures are running well above the Fed’s 2 per cent target.

In other corporate news, Tesla Inc. joined gains in electric-vehicle firms after the US Senate passed a key tax, climate and health-care bill. Retail traders who lurk in forums like Reddit’s WallStreetBets are back to betting against Wall Street pros as rallies for meme stocks like Bed Bath & Beyond Inc. and AMC Entertainment Holdings Inc. show shades of last year’s mania.