Investors have been permanently damaged by the U.S.-China trade war: Economist

U.S. stocks sank the lowest since early September after a report that the Trump administration is considering opening a new front in its trade war with China, fueling angst that the skirmish will derail already fragile global growth.

Stocks most sensitive to trade and equities linked to China paced the selling in American benchmark indexes, with the tech-heavy Nasdaq measures sliding more than 1.3 per cent. The S&P 500 eased of its lows when it hit its 50-day moving average. Officials are discussing sweeping limits to capital-market investments among the nations, forcing Wall Street to assess the impact on potentially billions of dollars of assets. Among the most notable Chinese companies traded on American exchanges, Alibaba Group Holding sank more than 6 per cent and JD.com Inc. lost 7 per cent.

The latest salvo from the Trump administration in its spat with China over trade rattled financial markets already on edge over rising political drama in Washington and signs that the American economy is cooling. Trade tensions had shown signs of easing in recent weeks ahead of a Chinese delegation’s visit next month for high-level talks.

“This back and forth escalation like ‘oh, we’re going to play nice and come to the table and the next day we’re going to limit money flows to this other country’ is just silly and it’s really playing with fire,” Jennifer Ellison, principal at San Francisco-based BOS, said by phone. “This is all part of what makes the economy tick and we could take some steps backwards if we really get this wrong.”

A U.S. crackdown on capital flows would expose a new pressure point in the economic dispute and cause disruption well beyond the hundreds of billions in tariffs the two sides have levied against each other. The Invesco China Technology ETF dropped 1.6 per cent, with losses accelerating midday. The iShares China Large-Cap ETF fell 1.4 per cent while the broader iShares MSCI China ETF was off 1.9 per cent. The KraneShares CSI China Internet Fund lost 2.6 per cent.

The news overshadowed data showing the U.S. economy cooled a bit in August. Tech shares were already under pressure after Micron Technologies lead losses after it cut its profit forecast, citing the U.S.-China trade war.

Elsewhere, Bitcoin slipped for a sixth session close to the US$8,000 mark, in its longest losing streak in almost a year. Earlier in Asia, Japanese equities tumbled as a swath of companies traded without the right to the next dividend payment. 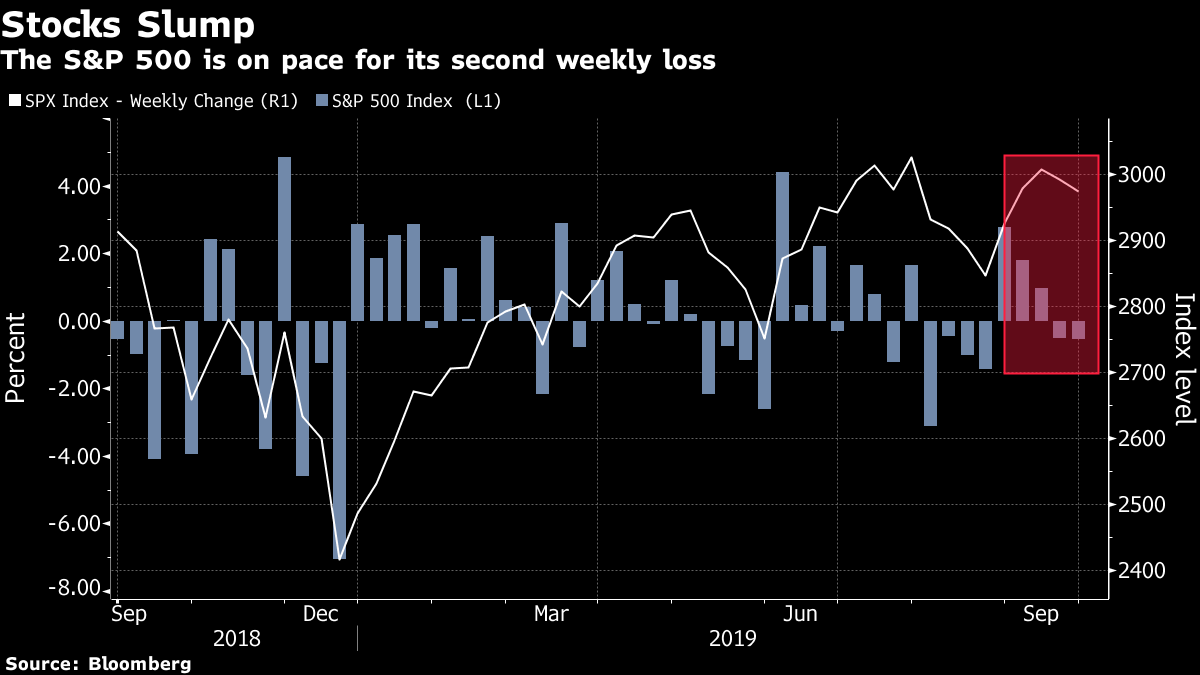