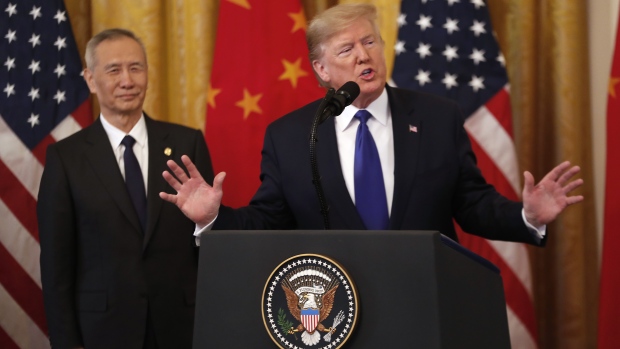 U.S. President Donald Trump speaks during a signing ceremony for the U.S.-China "phase-one" trade agreement in Washington, D.C., U.S., on Wednesday, Jan. 15, 2020. Trump is poised to sign a deal with China on Wednesday that leaves significant tariffs in place and for the first time would punish Beijing if it fails to deliver on pledges related to its currency, intellectual property and the trade balance. , Zach Gibson/Bloomberg

U.S. stocks closed at record highs as investors assessed the details of the partial trade deal with China. Treasuries gained and the dollar weakened.

The benchmark S&P 500 finished short of an earlier all-time intraday high after President Donald Trump presided over a signing ceremony with Chinese officials. The deal commits China to do more to crack down on the theft of American technology and corporate secrets by its companies and state entities, while outlining a US$200 billion spending spree to try to close its trade imbalance with the U.S. Soybeans slumped after China signaled purchases would be demand-based.

“While it does not appear that the ‘phase one’ deal addresses many of the structural issues that started the trade spat, it does mitigate the uncertainty that ongoing trade tensions present, namely the threat of new tariffs at a moment’s notice,” said Jason Pride, chief investment officer of private wealth at Glenmede Trust Co. in Philadelphia.

“It’s anti-climatic,” said Jim Paulsen, chief investment strategist at the Leuthold Group. “It was in there and people knew this for a while now, it’s about what you thought.”

Meanwhile, the Stoxx Europe 600 Index finished little changed, while equities across most of Asia fell.

Russia’s currency weakened as much as 0.6 per cent against the dollar. President Vladimir Putin replaced his long-serving prime minister and called for sweeping constitutional changes, fueling speculation that the Russian leader is moving to extend his grip on power beyond the end of his term in 2024.

It’s earnings season for the biggest American financial institutions, with Morgan Stanley and Bank of New York Mellon Corp. still to come.
The Federal Reserve’s Beige Book report on regional economic conditions is due on Wednesday.
China GDP, along with key monthly data for December, come on Friday.
A final reading on the euro-zone’s December inflation is also due on Friday.

There are some of the main moves in markets:

The MSCI All-Country World Index advanced 0.1 per cent to 573.80, the highest on record.

The Japanese yen strengthened 0.1 per cent to 109.90 per dollar, the largest rise in more than a week.

The yield on two-year Treasuries fell one basis point to 1.56 per cent, the lowest in a week.

The yield on 10-year Treasuries fell three basis points to 1.78 per cent, the lowest in almost six weeks.

Germany’s 10-year yield declined three basis points to -0.20 per cent, the biggest drop in more than a week.

Britain’s 10-year yield decreased seven basis points to 0.654 per cent, the lowest in seven weeks on the largest dip in six weeks.

West Texas Intermediate crude declined 0.4 per cent to US$57.96 a barrel, the lowest in six weeks.