Tech shares faltered in late trading after results from Amazon.com Inc. and Apple Inc. fell short of expectations, marring what had been a strong earnings period for heavyweights in the sector.

The biggest exchange-traded fund tracking the Nasdaq 100 slid 0.7 per cent as of 4:35 p.m. in New York, after Amazon warned its holiday profit could be zapped by higher costs and Apple’s sales missed forecasts. The online retailer lost 5 per cent and the iPhone maker dropped 4.8 per cent.

The late action overshadowed a strong cash session that saw U.S. stocks rally to an all-time high on optimism that Corporate America was delivering on lofty earnings expectations.

Apple and Amazon are the second and third biggest companies in the S&P 500 behind Microsoft Corp., accounting for almost 10 per cent of the index by weighting. The measure is on track for its best month in a year, though Friday’s session is setting up poorly for bulls.

The Treasury yield curve inverted between 20 and 30 years on Thursday for the first time since the U.S. government reintroduced a two-decade maturity in 2020. Two-year rates fell below 0.5 per cent after a torrid two day increase.

Investors have been bombarded by earnings all week from some of America’s biggest companies. Industrial bellwether Caterpillar Inc. rose after an earnings beat. Ford Motor Co. soared after lifting forecasts and resuming dividends. EBay Inc. dropped after reporting disappointing results late Wednesday. After the close of regular trading,

Excluding financial firms, companies in the S&P 500 that announced results have boosted net-profit margins by 40 basis points to 12.4 per cent from the previous quarter, according to data compiled by Bank of America Corp. The improvement has spread across major industries, with all but energy and consumer staples posting better margins. 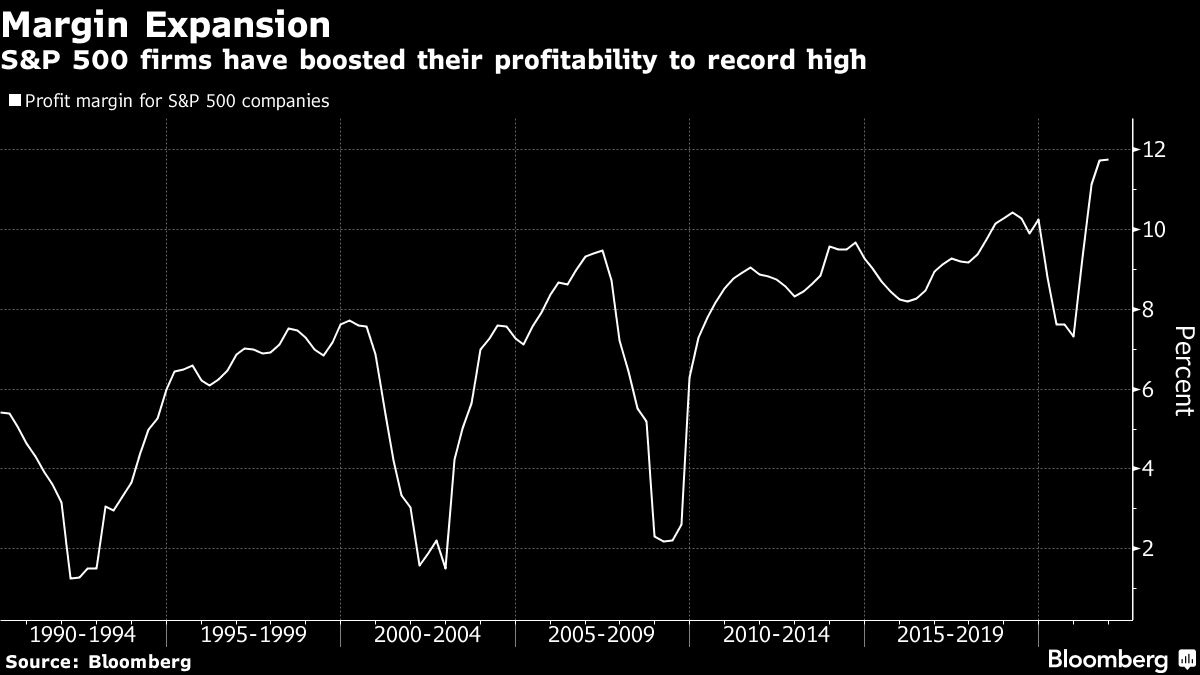 Earlier, a report showed that the U.S. economy expanded at an annual rate of 2 per cent in the three months through September, lower than the 2.6 per cent median estimate in a Bloomberg survey, as consumer spending slowed. The GDP price index also slowed from the last quarter, though it still rose more than analysts’ expectations. A separate report showed that weekly jobless claims fell to a pandemic low.

When 20-year Treasury issuance began in May 2020, yields in the sector were about 25 basis points lower than 30-year yields. While expectations for Federal Reserve rate increases beginning next year have flattened the curve generally, demand for the 20-year point appears to be more muted than for longer-tenor securities.

The euro gained and European bonds fell after European Central Bank President Christine Lagarde said higher inflation might be around for longer than expected, though the monetary authority expects prices to start moderating next year. The ECB earlier left borrowing costs unchanged and said bond-buying would continue at a moderately lower pace. The Stoxx Europe 600 Index rose.

Global stocks are still near all-time peaks, supported by a robust corporate earnings season so far, with profit margins widening on average despite cost pressures. The risk is sentiment could weaken if investors lose confidence in the ability of policy makers to contain inflation while nurturing the economic rebound.

“As long as the economy is not going through recession or anything disastrous, but if things are delayed, if we’re going on the right path, but at a slower pace -- which means the policy support persists for longer -- still positive for markets,” said Lee Ferridge, head of North America multi-asset strategy at State Street, on Bloomberg TV and Radio’s “Surveillance.”