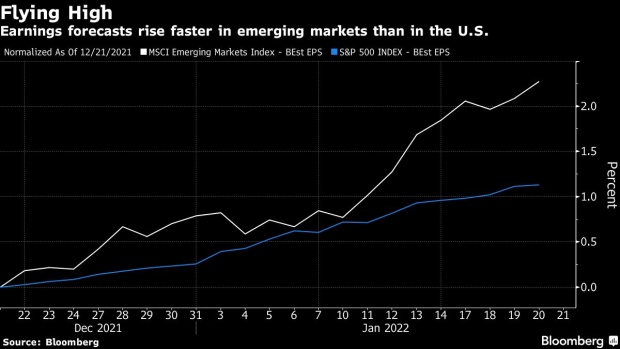 (Bloomberg) -- Stars may be aligning for an era of outperformance for emerging-market stocks, if the first three weeks of 2022 are any indication.

The MSCI Emerging Markets Index has made the best start to a year since 1990, relative to the S&P 500. Earnings estimates for the index are rising twice as fast as those for the U.S. benchmark. And to top it off, developing-nation shares are still almost 40% cheaper, offering a buying opportunity amid the technology-led stock rout in New York.

While emerging-market stocks were weighed down by Russia-Ukraine tensions on Monday, showing their vulnerability to a global risk-off shift, the broad turnaround in fortunes suggests they can sustain an edge over the U.S. in a difficult year. Investors now favor the MSCI gauge after it slumped to a 20-year low against U.S. stocks, capping a “lost decade” of underperformance amid the 2013 taper tantrum and the U.S. trade war with China.

These charts show the outlook for developing-nation equities in 2022:

The ratio between the MSCI gauge and the S&P 500 has jumped 9.5% since Jan. 1. The last two times emerging markets had relative gains of comparable magnitude -- in 1990 and 2001 -- they heralded outperformance for developing-nation stocks lasting three and seven years, respectively. Previous gains have often been driven by a boom in commodity prices, drawing flows into highly correlated assets. This time, the Bloomberg Commodity Index is in a bull market, trading near a seven-year high.

While the pandemic has left most emerging markets reeling from the economic impact of lockdowns and lagging vaccination programs, hopes are growing for a catch-up with the rebound seen in developed markets. Analysts are now raising earnings estimates for developing-nation companies twice as fast as for U.S. firms, suggesting newfound optimism for the pandemic recovery.

After slumping to their cheapest valuation relative to U.S. stocks since 2006, emerging-market stocks are now staging a recovery. The discount has narrowed to 38% from 43% at the end of last year. But that doesn’t mean they are becoming expensive: They have a long way to rise before reaching their historical average discount of 26%. In other words, they currently offer a rare combination of attractive valuations and positive price momentum.

So where’s the stellar performance in emerging markets coming from? Asia is underperforming amid higher valuations and woes for technology stocks and debt-laden property shares in China. The balance has shifted in favor of Latin American stocks, where dissipating political risks from Chile to Peru -- as well as the correlation to commodity prices -- are attracting investors. The region was an underperformer within emerging markets last year, but is now leading gains.

The MSCI emerging-markets gauge fell 1.5% and futures on the S&P 500 dropped 1.1% on Monday amid concerns around Federal Reserve tightening and geopolitical tensions over Ukraine.

(Adds reference to S&P 500 futures in the last paragraph)