Market rally is not sustainable in the medium-long term: Bob Iaccino

US stocks rose on the final day of trading before the release of key consumer-price data, with risk sentiment buoyed by speculation inflation is near peaking. The dollar fell for a second day.

The S&P 500 extended last week’s rally, notching the biggest gain over a four-day span since June as all 11 major industry groups rose. Apple Inc. was the largest contributor to the benchmark’s advance as pre-order data showed the iPhone 14 Pro Max was the best selling model, surpassing what the older version did over a similar timeframe. The dollar declined versus all of its G-10 peers except the yen. The Treasury curve steepened, with 10-year yields rising after a weak auction of similar-maturity notes.

US inflation data due Tuesday is expected to show headline CPI cooled in August to an 8 per cent a year pace while the core measure that excludes food and energy is seen accelerating. Meanwhile, traders almost fully expect another jumbo-sized Federal Reserve hike next week, following two 75-basis-point increases, taking their cue from central bank officials supporting that view. 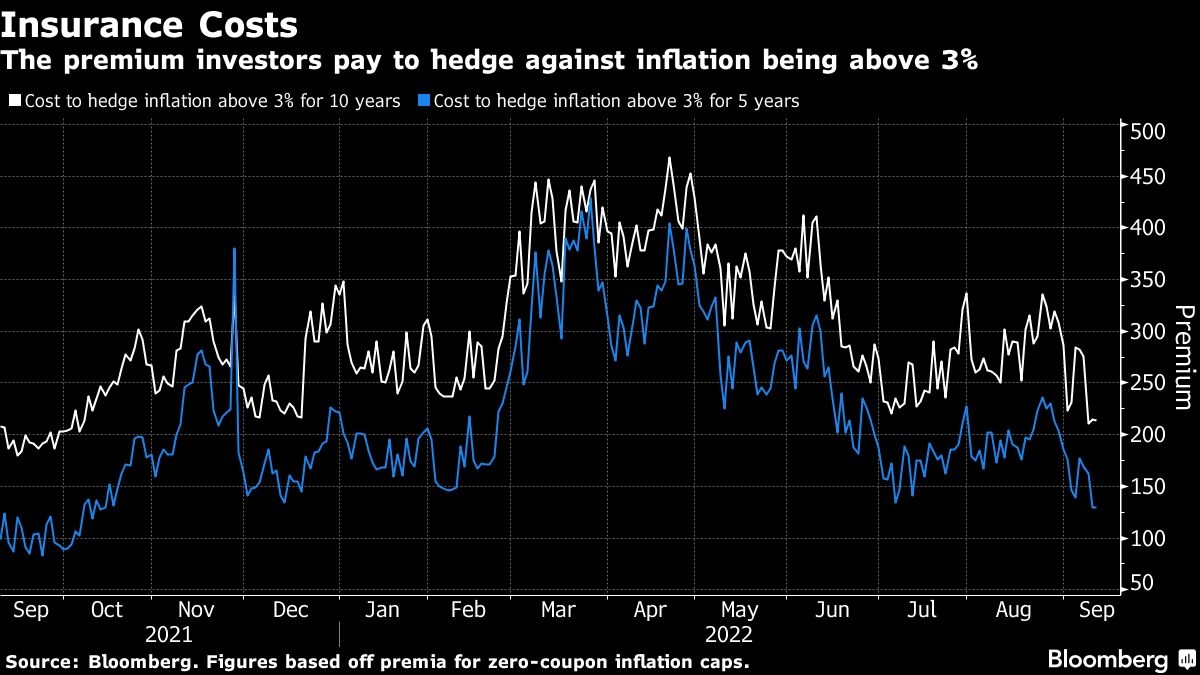 US bond-market indicators suggest that investors are gaining confidence that this year’s spike in inflationary pressures will be brought under control. The cost of hedging high inflation has fallen, while so-called breakeven rates on Treasury Inflation Protected Securities -- a proxy for where markets expect inflation to be -- have also dropped.

“I cannot see any scenario where the market doesn’t decide that CPI is heading in the right direction and that October will be lower than September and so on,” Peter Tchir, head of macro strategy at Academy Securities, wrote in a note. “That combination should allow markets to continue to enjoy the strength that they saw towards the end of last week.”

Stocks are building a bullish technical trend after the S&P 500 rallied above 3,900 week with an increasing number of stocks passing key thresholds, according to Bank of America Corp.’s technical strategist Stephen Suttmeier.

“The bad news is that US CPI inflation above 8 per cent keeps the Fed hawkish and interest-rate volatility high,” Yuri Seliger, credit strategist at Bank of America, wrote. “The good news is that US inflation is peaking now according to our economists, and the trend should flip to a clear downward trajectory in 4Q and into 2023.”

The euro jumped the most in six months after Bundesbank President Joachim Nagel signaled support for further interest-rate hikes in Europe. The Stoxx Europe 600 index climbed for a third day, with retailers leading the advance amid optimism over plans to curb energy bills.

The European Union is set to propose a mandatory target to cut power use -- a step toward rationing -- along with measures to funnel energy company profits to struggling consumers as it tries to stem the crisis.

Crude oil and industrial metals advanced as the dollar’s descent countered demand concerns. Bitcoin extended a rally amid a brighter mood in global markets, climbing to a three-week high above US$22,000.