US stocks entered a bear market, Treasury yields spiked to levels not seen in a decade and the dollar rallied as the fallout from a hot inflation reading continued to rattle global trading already shaken by worries the Federal Reserve will plunge the economy into a recession.

Another brutal bout of selling sent the S&P 500 to the lowest since January 2021 and down more than 20 per cent from its January peak. Highly valued tech shares bore the brunt of the rout, with the Nasdaq 100 slumping about 4.5 per cent. The Cboe Volatility Index jumped above 30 and the futures curve inverted in a rare instance of traders pricing in more uncertainty in the here-and-now than in three months. Speculative areas of the market inflated by years of government largesse buckled. Profitless software firms, newly public companies and blank-check entities sold off. Bitcoin plummeted below US$24,000 after a lending platform ceased operations.

Credit markets continued their historic repricing of rate trajectories. Treasury 10-year yields climbed to the highest since 2011, while two-year rates jumped to levels last seen before the 2008 financial crisis. The cost to protect investment-grade debt from default soared as a closely watched segment of the US bond curve inverted. Only the dollar provided a respite from the selloff, rallying to a two-year high.

“It’s going to get a little uglier,” said Victoria Greene, chief investment officer at G Squared Private Wealth. “It’s going to be very hard for stocks to rally when the Fed continues to put hawkish pressure. There’s no way they can slam on the brakes with inflation without slamming on the brakes economically speaking. It’s funny we still have recession deniers.”

Money markets now see the Fed terminal rate at four per cent for the first time, and are pricing for it to get there by the middle of next year. Traders are now betting on 175 basis points of tightening by September -- implying two half-point and one 75-basis-point hike. If that comes to pass, it would be the first time since 1994 the Fed resorted to such an aggressive pace. Officials are muzzled before the decision in two days and Chair Jerome Powell’s conference, where the characterization of inflation and long-term forecasts for the fed funds target -- the so-called dot plot -- will be critical.

As the Fed attempts to boost its credibility on inflation, it could reach for a more drastic increase if it’s compelled to demonstrate a “Volcker moment,” said Steven Englander, global head of Group-of-10 currency research at Standard Chartered Bank. He was referring to Fed Chair Paul Volcker, who crushed inflation with a series of historic rate increases, starting in 1979. With that possibility, Englander predicts there’s a 10 per cent chance of a 100-basis-point increase Wednesday -- with his baseline still a half-percentage point increase.

The dramatic moves in the world’s biggest bond market spell further trouble for battered US equities. Recent history shows that stocks tend to swoon when the 10-year Treasury yield hits three per cent, as seen in early May and in late 2018, according to DataTrek Research’s Nicholas Colas. It hovered near 3.4 per cent Monday.

Equities still aren’t fully reflecting the risks facing corporate earnings, according to strategists at Morgan Stanley, Goldman Sachs Group Inc. and BlackRock Investment Institute. Weaker consumer demand and aggressive tightening by the Fed in an attempt to fight the hottest US inflation in four decades can do further damage to bottom lines and, in turn, share prices. For Evercore strategist Julian Emanuel, “what’s been missing the last several months is sort of what I would call a ‘cathartic flush out,’ where you get the VIX above 40, which is one of the things you need for at least a trading bottom.”

The last bulwark in stocks is in danger of shattering, if the mood of chief executive officers is any indication. A survey of sentiment among corporate stewards by the Conference Board showed that CEO confidence declined sharply in the second quarter of the year for the fourth straight time. Similar skepticism in the past has always coincided with a recession in profits, wrote Lisa Shalett, chief investment officer at Morgan Stanley Wealth Management. 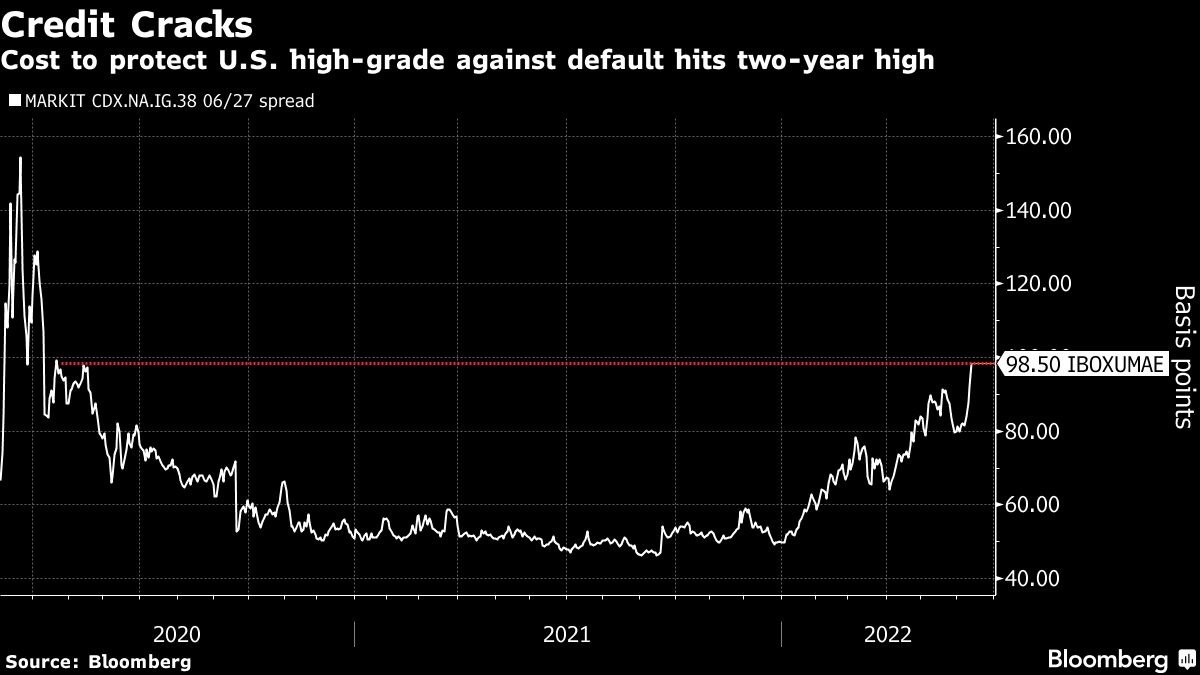 The damage in the highly speculative crypto market took on staggering contours as the value of all assets sank below US$1 trillion, down by two-thirds from the heady levels reached in November. Bitcoin and its cousins have largely tracked risk assets, but the latest leg down -- as much as 17 per cent for the world’s largest digital token -- came with concern that the freezing of withdrawals at the Celsius lending platform might indicate systemic risk in the crypto world that could accelerate the meltdown.

“You can’t have these massive drawdowns without some real damage being done and real money being lost,” said Art Hogan, chief market strategist at National Securities.