Good Q1 for tech, but watching the next 3-6 months: Gerber Kawasaki’s Ross Gerber

U.S. stocks rose in a late-day turnaround as dip-buyers emerged ahead of a busy week for Big Tech earnings.

The S&P 500 rallied back in a choppy afternoon session to end near highs of the day, after falling to lows near the 4200 level. The tech-heavy Nasdaq 100 climbed more than 1 per cent. Twitter Inc. extended gains after billionaire entrepreneur Elon Musk agreed to buy the social networking platform. Alphabet Inc., Apple Inc., Amazon.com Inc. and Meta Platforms Inc. are all due to report.

“This week may easily be a fork in the road of equities,” JC O’Hara, chief market technician at MKM Partners, wrote in a note. “We have nearly a third of the S&P 500 and half of the Dow Jones set to report. Bottom-up drivers will either confirm or reject what the challenging macro backdrop has given us over the last three weeks.”

Shares in Europe and Asia fell as China’s COVID outbreak continued to compound fears sparked by faster Federal Reserve tightening. The Stoxx 600 Europe Index fell, with miners and energy firms at the forefront of losses. And West Texas Intermediate futures slid below US$100 a barrel amid a rout in other raw materials. Bonds rose.

Fears of wider curbs in Beijing are spooking investors already fretting about the risk of a global slowdown as the Fed raises rates to tame inflation. A broad gauge of Chinese stocks dropped to the lowest in almost two years as policy makers put some areas of the capital under lockdown amid the government’s steadfast adherence to its COVID-zero policy. 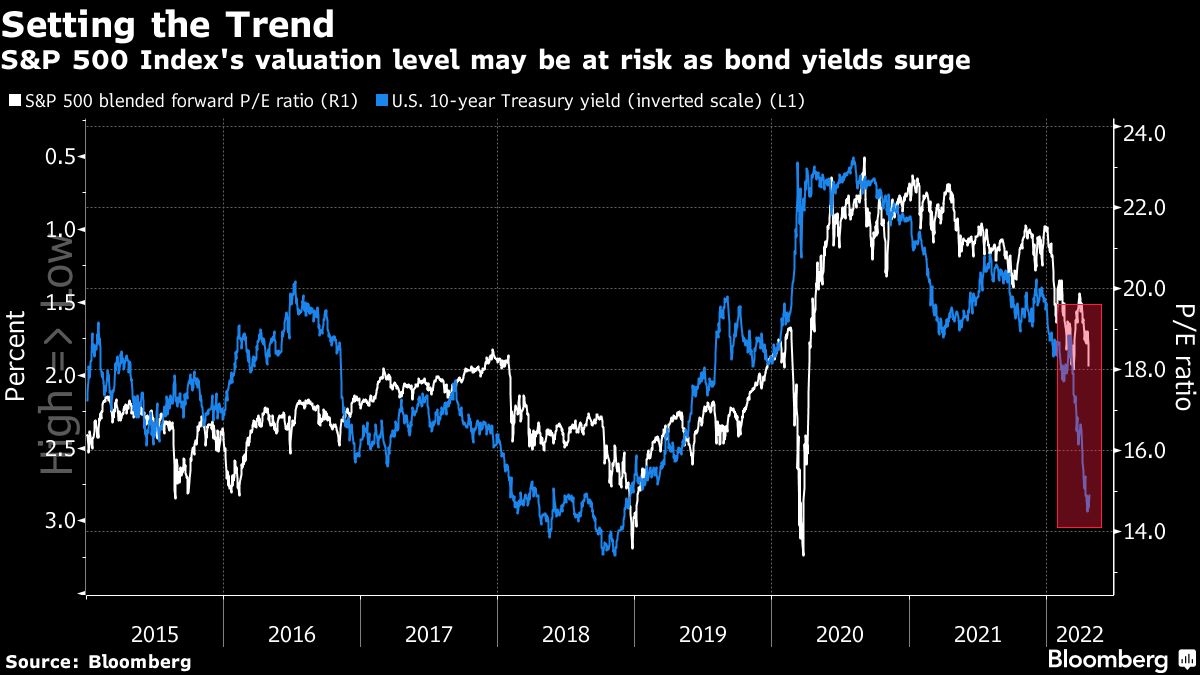 The S&P 500 is about to drop sharply, Morgan Stanley’s Mike Wilson warned, as investors struggle to find havens amid fears that aggressive Fed action will engineer a recession. Morgan Stanley strategists said a quickly tightening Fed is looking “right into the teeth of a slowdown” in a note Monday, and that crowded defensive stocks no longer pay.

A flight to havens lifted global government bonds, with the yield on the U.S. benchmark note down 10 basis points. The dollar extended an advance, while the euro fell even after Emmanuel Macron’s win in the French election removed a key risk for markets. Gold shed nearly 2 per cent.

Monday’s pullback in the soaring price of commodities since Russia’s invasion of Ukraine has done little to assuage concerns about runaway inflation.

China’s central bank is in a different position, however, as it looks to shore up its economy. On Monday it cut the amount of money that banks need to have in reserve for their foreign-currency holdings, prompting the yuan to ease recent declines.

“We continue to believe that U.S./global equities will not bottom until markets stop discounting ever more aggressive Fed rate policy,” wrote Nicholas Colas, co-founder of DataTrek Research. “It’s not that the current news flow is bad. The problem is that the range of potential economic outcomes is too wide to predict future corporate earnings with any certainty.”

Events to watch this week: