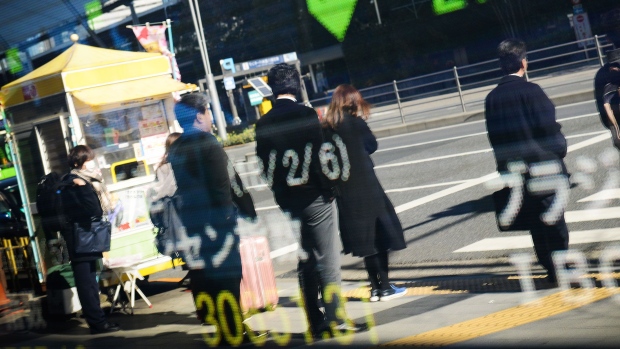 U.S. equities gained, led by FANG shares, while European stocks pared losses following a mixed session in Asia as a big week for central-bank policy gets underway. Treasuries and the dollar nudged downward.

The dollar weakened after a Federal Reserve survey of factories in New York State plunged in June by the most on record, before trimming its loss. Treasuries pared a drop on the news, but they stayed lower alongside European bonds as investors looked ahead to a week in which the Fed, the Bank of Japan and the Bank of England all set monetary policy.

Investors will be scrutinizing the Fed’s decision and messaging on Wednesday for signals on the chances of rates cuts ahead. Meanwhile, U.S. Commerce Secretary Wilbur Ross reiterated that the prospect of a major trade deal is unlikely to emerge from a possible meeting between President Donald Trump and Chinese President Xi Jinping at the Group of 20 summit in Osaka this month.

“We’ll find out Wednesday if the market is right about how dovish it is when it comes to monetary policy,” said Arthur Hogan, chief market strategist at National Securities Corp. “So what we’re looking for is affirmation of where the market is already, and anything that fails to affirm that probably is a negative toward the S&P 500.”

Elsewhere, oil futures were little changed as Saudi Arabia expressed hope that OPEC and its allies will agree to extend production cuts into the second half. Bitcoin jumped as much as 10 per cent, heading toward its highest close in more than a year.

Federal Reserve, the Bank of Japan and the Bank of England all set monetary policy, along with central banks in Norway, Brazil, Taiwan and Indonesia. The Fed meeting begins Tuesday with a decision and press conference the next day. Officials are expected to debate a rate cut to shelter the U.S. economy, in part, from the fallout caused by escalating trade disputes. In the U.K. Tuesday there will be a second ballot on the leadership contest to choose Theresa May’s successor as leader of the country’s ruling party. Final May CPI data for the euro zone are due Tuesday.

The S&P 500 Index rose 0.3 per cent as of 10:52 a.m. New York time, while the Nasdaq Composite Index gained 0.8 per cent and the Dow Jones Industrial Average increased 0.2%. The Stoxx Europe 600 eased less than 0.1%. The MSCI Emerging Market Index dropped 0.3 per cent. The MSCI Asia Pacific Index fell 0.4 per cent, the fourth consecutive decline.

West Texas Intermediate fell 0.7 per cent to US$52.13 a barrel, the first drop in three trading sessions. Gold dropped 0.1 per cent to US$1,340 an ounce. The Bloomberg Commodity Index rose less than 0.1 per cent, the third consecutive gain.

--With assistance from Yakob Peterseil