The equity market rally will soon run out steam: Analyst

U.S. stocks rose in a choppy day of trading as dip-buyers emerged in the final minutes of trading Friday. Treasuries fell, with the short end of the curve bearing the brunt of the selloff.

The S&P 500 ended the day up 0.5 per cent, near highs of the day with the 1 per cent swing Friday the smallest since Feb. 15. The Nasdaq 100 closed little changed. The yield on the two-year Treasury note, among the most sensitive to changes in interest rates, rose 14 basis points to 2.28 per cent.

The S&P 500 lurched between gains and losses this week as investors grappled with the risks to the economic recovery from monetary-policy tightening and Russia’s war in Ukraine. Amid the volatilty, stocks notched their second weekly gain.

“I think this week was a great confirmation of why we shouldn’t get too concerned about the short term and the volatility or the headlines du jour so to speak because obviously it rebounds just as fast as it declines,” Nancy Daoud, CEO and private wealth advisor at Ameriprise Financial Services LLC, told Bloomberg TV. “It’s just great confirmation that time in the market is so much better and so much more effective than timing the market.”

Treasuries fell, on course for one of their worst quarterly routs since at least the early 1970s, as the market ramped up bets on the Federal Reserve hiking rates. Swaps traders are pricing in a full two percentage points of additional Fed hikes for this year, and Citigroup Inc. economists boosted their forecast for rate increases this year, including four straight half-point moves.

Oil reversed losses following news that suggested Yemeni rebels were stepping up attacks on energy and power sites in Saudi Arabia. Crude in New York rose near US$113 a barrel after earlier falling below US$109 a barrel. 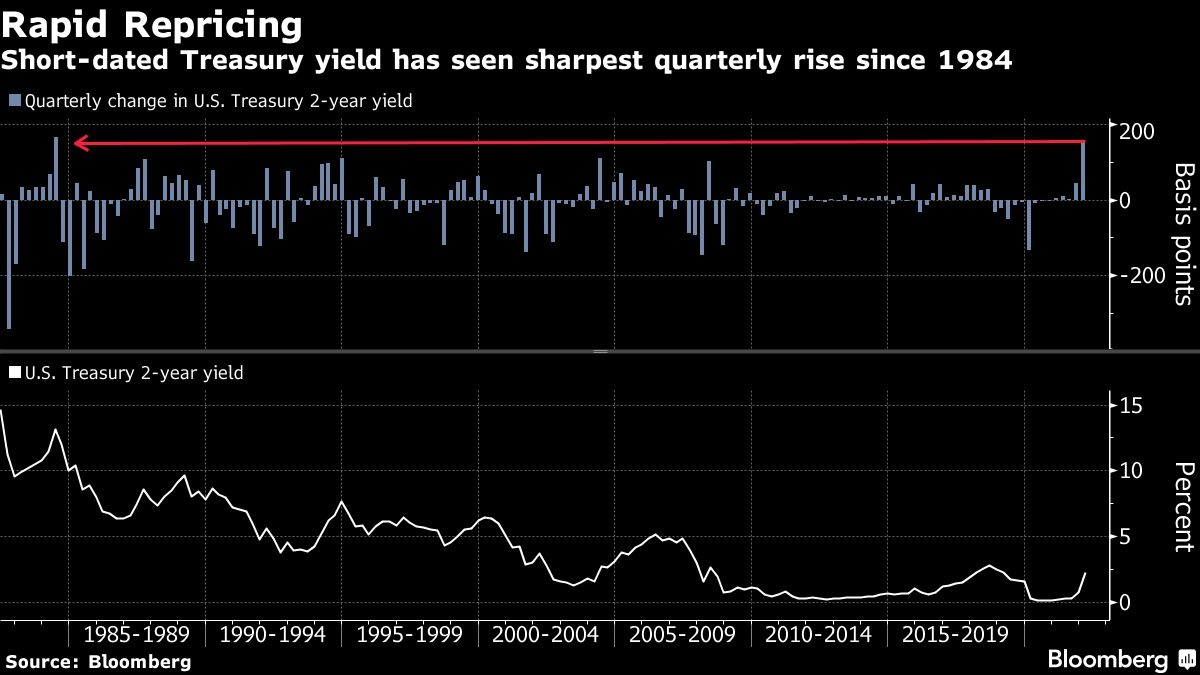 New York Fed President John Williams said the pace of rate increases should be driven by the data, including tightening by a half percentage point if needed. Russia’s invasion of Ukraine have boosted raw-material costs, stoking expectations of higher inflation and more aggressive Fed interest-rate hikes.

Meanwhile, the Biden administration is increasingly worried that Russian President Vladimir Putin may lash out dangerously, pressured by the struggles of his military campaign and far-reaching sanctions. The U.S. and its allies warned Putin against using biological, chemical or nuclear weapons.

Russian stocks fell, reversing most of the gains made in the previous session when the market reopened following a record long shutdown, while government measures to prevent a selloff helped limit the losses.