Investors should be more cautious on where they allocate capital moving forward: Chad Morganlander

The S&P 500 rose 0.7 per cent as earnings at Travelers Cos. and Johnson & Johnson beat expectations while higher commodity and freight costs weighed on shares of Procter & Gamble Co. Crypto stocks were also higher as Bitcoin rose to record levels following the launch of the first futures exchange-traded fund.

A fifth day of gains brings the benchmark index within half a percent of an all-time high as the market grapples with the prospect of tighter monetary policy amid rising prices. The dollar was weaker against major peers as traders raised bets central banks around the world will raise interest rates before the Federal Reserve. Meanwhile, global bond yields were mixed with the U.S. 10-year Treasury yield higher at 1.64 per cent.

“Another week of upbeat results could be the boost that bulls are after to recapture those record levels,” said Fiona Cincotta, senior financial markets analyst at City Index. 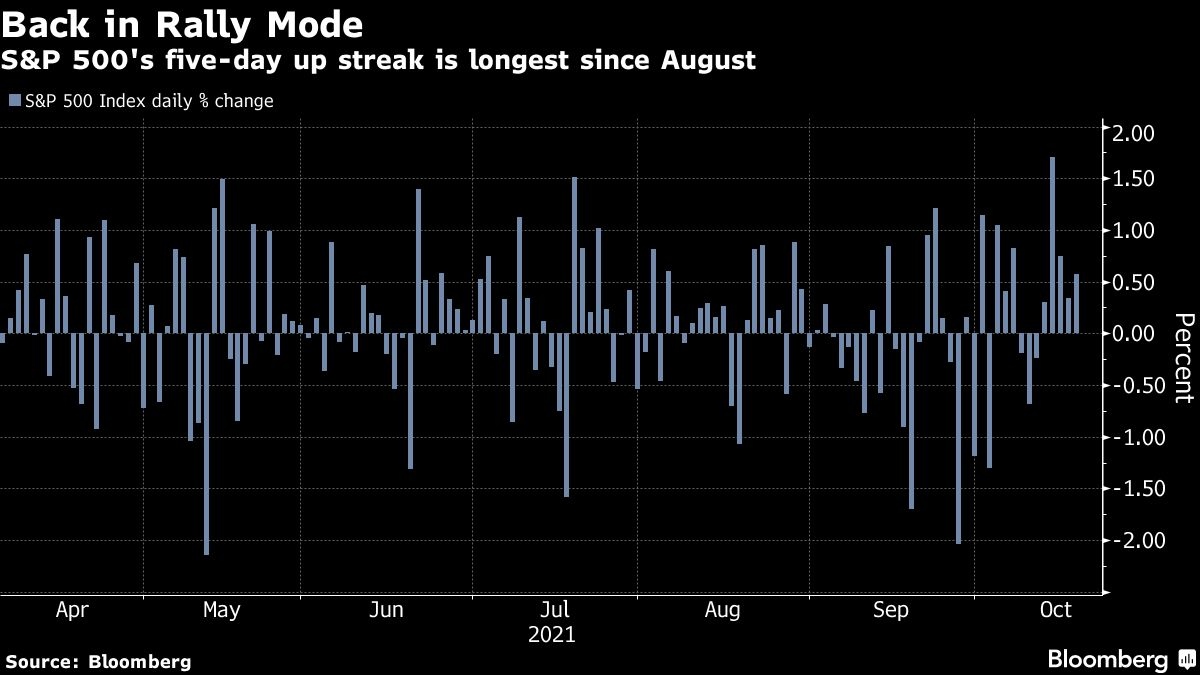 Investors are paying close attention to the earnings season to see how higher costs for energy and raw materials are affecting margins. Crude oil in New York climbed in a volatile session after Russia signaled it may not give Europe extra natural gas without approval for the Nord Stream 2 pipeline. Meanwhile, base metals took a breather on the race to record highs.

“This earnings season could be highly important for investors, as inflation, labor, supply, and currency risks settle in,” said Lauren Goodwin, economist and portfolio strategist at New York Life Investments. “We will be particularly attuned to companies’ guidance on the path ahead and whether higher costs could reduce corporate margins.”

Fed Governor Christopher Waller said the central bank’s bond-buying program should begin tapering next month. However, he added interest-rate increases are probably “still some time off.” The comments were the latest in a slew of speeches from Fed officials expected to try to calm market jitters this week.

“They’re probably going to be very careful and cautious on rate hikes because of the fact that they just don’t have enough information on the inflation front,” said Subadra Rajappa, managing director and head of U.S. rates strategy at Societe Generale. “We didn’t see the market fully price in three hikes by the end of 2023. And now you’re going to see a little bit of adjustment based on what the Fed’s saying.”