Stocks climbed as investors shrugged off tapering concerns highlighted in minutes of the Federal Reserve’s last meeting. The dollar gained and the Treasury yield curve flattened as short-end rates rose.

The S&P 500 rose, after briefly dipping following release of the minutes, with real estate and energy stocks leading gains. The tech-heavy Nasdaq 100 outperformed major benchmarks. Trading volume has been less than average ahead of the U.S. Thanksgiving holiday. A gauge of the dollar jumped to the highest since July 2020. Data earlier today showed a resilient U.S. consumer despite accelerating inflation.

The Nov. 2-3 meeting minutes noted the committee “would not hesitate to take appropriate actions to address inflation pressures.” Since then, inflation surged to the highest rate since 1990 and Fed officials have said it may be appropriate to discuss quickening the pace of tapering at the December meeting. That’s triggered a jump in Treasury yields, with the two-year rate soaring to the highest since early March 2020 and markets bringing forward bets on rate hikes.

“We need to be careful here about loading up on risk,” Emily Roland, co-chief investment strategist at John Hancock Investment Management, said on Bloomberg TV. “We want to own some cyclicality to play this continued rebound and this continued unfolding of the recovery here, but we want to just pump the brakes a little bit.” 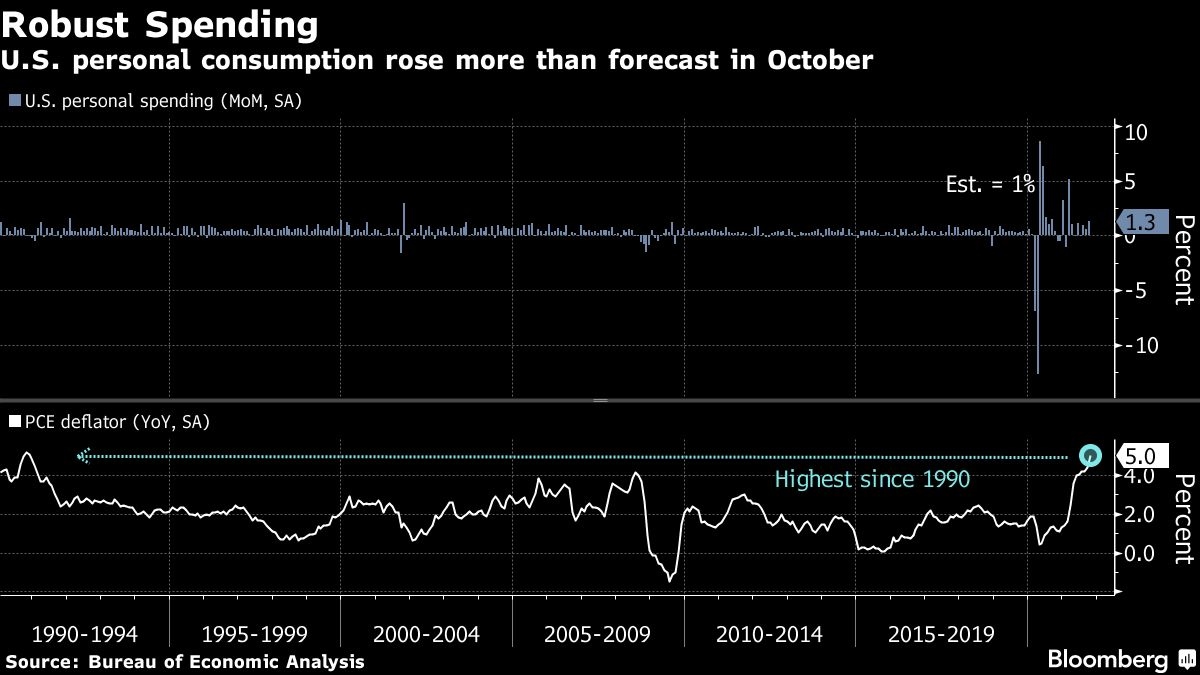 U.S. personal spending rose in October from a month earlier by more than expected, while a closely watched inflation measure posted the largest annual increase in three decades. In addition, data showed 199,000 people made initial jobless claims in the period ended Nov. 20, the least since 1969, while orders placed with U.S. factories for business equipment rose in October by more than forecast, highlighting solid momentum for capital investment at the start of the fourth quarter.

“There are hints that the job market is pretty good in today’s numbers,” Marvin Loh, global macro strategist at State Street Corporation, said on Bloomberg TV. “If there are signs that the job market is going to heal itself faster then let’s say than the second half of next year, rate hikes are going to be live. But having said that, we’re already pricing in mid-2022 and starting to think about May of 2022, so I don’t see how much more we can get from an aggressive side of things.”

Damping inflation is now center-stage for policy makers, with ultra-loose, pandemic-era stimulus set to be wound down. At the same time, investors are on the edge over the resurgence in COVID-19, notably in Europe.

Oil edged slightly lower a day after U.S. stockpiles rose and the day after the announcement of a coordinated release crude from strategic reserves. The White House announced on Tuesday a release of 50 million barrels from its reserves in coordination with the U.S., China, Japan, India, the U.K., and South Korea.