Stocks pushed higher in the final hour of New York trading, with a rally in megacaps like Apple Inc. and Tesla Inc. driving a rebound that followed the worst weekly rout for the market since mid-June.

Major equity benchmarks had a tough time finding direction Monday as traders geared for another super-sized US rate increase amid fears on whether the Federal Reserve could overtighten and raise the odds of a hard landing. Treasury 10-year yields hovered near 3.5 per cent while the two-year rate, which is more sensitive to imminent policy moves, hit the highest since 2007.

“Volatility is expected to remain heightened through the remainder of this year at a minimum,” said Megan Horneman, chief investment officer at Verdence Capital Advisors. “Until there is consistent improvement from inflation, timing the peak in Fed rate hikes is challenging. While we do not rule out a testing of the June S&P 500 low, we would look at it as a potential buying opportunity.”

Traders are betting the Fed will hike by 75 basis points Wednesday, signal rates are heading above 4 per cent and will then pause. The long hold strategy is rooted in the idea the central bank would avoid the disastrous stop-go policy of the 1970s that allowed inflation to get out of hand. While a case can be made for going bigger, a shock full-point boost could add to recession jitters.

To Sam Stovall, chief investment strategist at CFRA Research, a full-point hike would jolt Wall Street as it would imply a central bank “overreacting to the data rather than sticking to its game plan.” Following the previous seven rate increases of that magnitude, the US equity benchmark fell four times each over one-, three-, and six-month periods, he added.

Ed Yardeni, president of his namesake research firm who nailed the market bottom in 1982 and 2009, sees the Fed boosting rates by 100 basis points this month, with Chair Jerome Powell and the central bank’s economic projections looking hawkish. 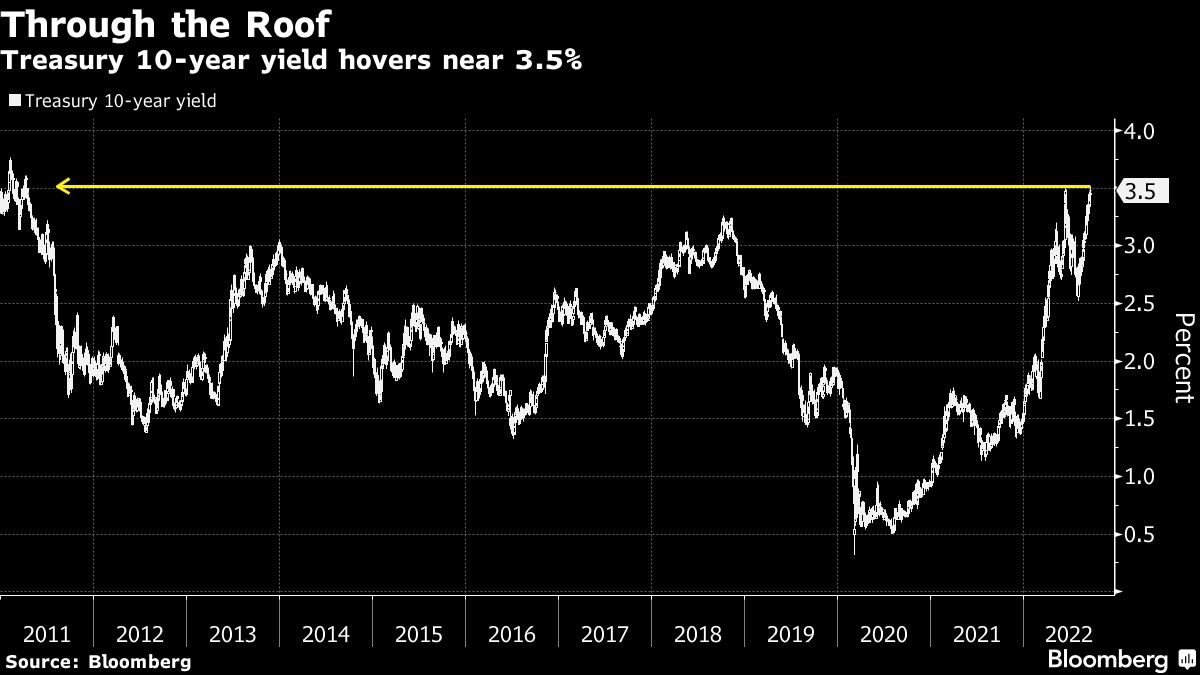 While a policy surprise could certainly move markets, the Fed’s revised forecasts for where the policy rate will ultimately come to rest and how long it’s likely to stay at that level will be equally important. Swap contracts that forecast rates over the next two years now peak around 4.5 per cent in March 2023 -- a full point higher than was expected after the last meeting in July.

“The question to focus on isn’t whether the Fed will hike rates by 75 basis points or 100 basis points,” said Phillip Nelson, head of asset allocation at NEPC. “What we’re looking for is how aggressive Powell will be in the next six to 12 months. The messaging we get in the next few weeks could be a bigger data point and a shock to investors.”

In a sign of how severe the equity beatdown has been, the S&P 500 has been trading below a key technical level for the longest stretch since the global financial crisis.

Its long-term trend has turned “sharply lower recently,” and the index has closed below its 200-day moving average for 110 trading sessions, the longest streak since the bear markets of 2008-2009 and 2000-2002, according to Bespoke Investment Group.

During the five-week period that started in mid-August and ended Sept. 7, long-only institutional investors sold US$51.2 billion worth of US-traded stocks -- roughly a quarter of what they dumped in the prior 31 weeks of this year, according to an S&P Global Market Intelligence analysis. The data don’t include last week, when a surprising inflation print stoked concerns of a Fed tightening that’s more aggressive than expected.

“Due to current negative indicators including high inflation and the Fed’s upcoming rate announcement, global economic growth concerns and earnings expectations, we expect to see a continued negative pattern in the near-term,” said Mark Hackett, chief of investment research at Nationwide. “It will not take much good news to light a fire under the market, but we don’t expect that good news to come in the next few weeks.”

That’s yet to happen in this year’s rout. Even as the VIX curve shifted higher and became flatter, it’s still in its usual upward-sloping shape, meaning the here-and-now cost for protection is lower than several months out.

In a time-tested harbinger of an economic downturn, short-term US rates have exceeded yields on longer maturities for months. The MLIV Pulse survey, which drew 737 responses, showed that the bulk of contributors expect a deeper inversion. Some see it reaching levels last seen in the early 1980s, when Paul Volcker ratcheted up borrowing costs to break the back of hyperinflation.

The majority of the MLIV survey’s contributors say it’s best to bet on dollar gains, and 44 per cent prefer to sell stocks.