Stocks fell, capping the worst week since the market hit its low for the year in June, as FedEx Corp.’s warning added to growing concern over outsized Federal Reserve interest-rate hikes.

The S&P 500 fell for a third day this week, down close to 5 per cent for the period. Dip buyers emerged in afternoon trading, with gains in some big tech names including Nvidia Corp. and Intel Corp. FedEx plunged more than 20 per cent after the package-delivery giant withdrew its earnings forecast, citing weakening business conditions.

Equity markets took an abrupt pivot lower this week after hotter-than-expected inflation data spurred traders to ratchet up wagers for rate hikes and sparked the worst one-day stock selloff in two years. Since then swaps continue to price in a 75 basis-point hike when the Fed meets next week -- with some wagers leaning toward a full point -- and policy-sensitive two-year yields have climbed this week to the highest level since 2007, deepening the curve inversion that’s seen as a recession signal.

“The US is probably at the gate of a recession of an unknown depth -- equities see it as very limited, credit markets as contained while the 2-10 slope expects a more dire situation,” said Florian Ielpo, head of macro research at Lombard Odier Asset Management. “A significant layer of macro uncertainty now dominates markets.” 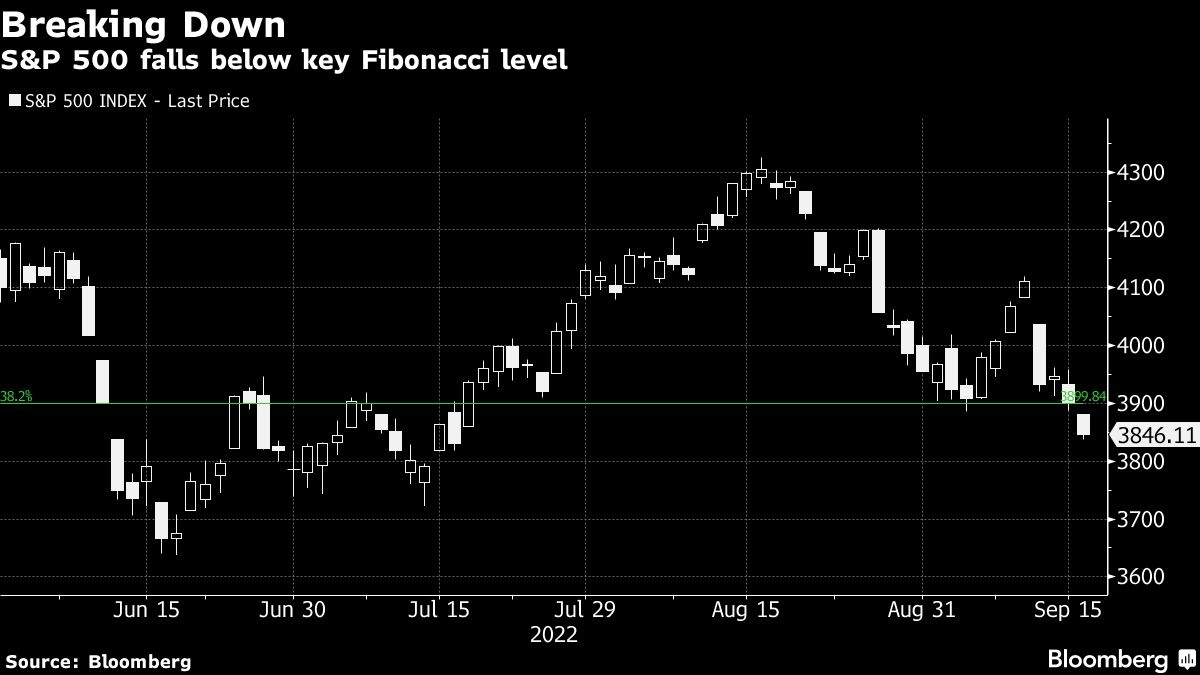 On the technical side, the S&P 500’s pivot below a key Fibonacci retracement of June-August rally has Win Thin, head of currency strategy at Brown Brothers Harriman, suggesting stocks could revisit June lows.

“It really reflects the ongoing repricing of risk assets in a world of tighter and tighter liquidity,” he said. “Equities, EM, risk all benefited from years of zero interest rates and now we are seeing the other side of that trade. Bottom line: further losses likely in risk assets.”

FedEx’s warning comes as companies across industries start to paint a grimmer picture of the economy. Bank of America Corp.’s Michael Hartnett said an earnings recession will likely drive US stocks to new lows, well below current levels.

Traders briefly priced the Fed’s key policy rate peaking at 4.5 per cent in March this week as the central bank escalates its effort to contain inflation. That expected peak was up by a full percentage point since the Fed’s last policy meeting in July.

A gauge of dollar strength was little changed, with greenback trading mixed against major peers. A University of Michigan survey showed inflation expectations dipped, with consumers expecting prices will climb at an annual rate of 2.8 per cent over the next five to 10 years, the lowest since July 2021, according to the survey. They see costs rising 4.6 per cent over the next year, the lowest since last September.

Europe’s benchmark share gauge fell for a fourth day of losses, with mail and parcel delivery companies taking a hit after FedEx’s warning. The UK’s benchmark outperformed as the British pound sank to its weakest level against the dollar since 1985.