Stocks came under pressure as Treasury yields hit multiyear highs, with traders bracing for a hawkish Federal Reserve that’s expected to boost rates to levels not seen since before the 2008 financial crisis.

A slide in equities pushed the S&P 500 more than 10 per cent below its Aug. 16 high -- which marked the peak of rally from its June lows. About 93 per cent of its companies were down Tuesday, with all major groups in the red. Two-year US yields approached 4 per cent. Investors also kept an eye on geopolitical developments amid news that the Kremlin was moving hastily to stage sham votes on annexing the regions of Ukraine its forces still control.

Fed officials are about to put numbers on the “pain” they’ve been warning of when they publish new projections for the economy Wednesday. They could show a substantial rise in rates and unemployment ahead as the estimated price tag for reducing inflation. Officials are also widely expected to boost rates by 75 basis points -- and a few market observers say a full-point hike might also be on the table.

To Charlie McElligott, cross-asset strategist at Nomura Securities International, the market is underpricing the possibility that the Fed could opt for a bigger move of 100 basis points. In addition to last week’s inflation surprise, he cited the fact that both the labor market and wages remained “hot” since Fed Chair Jerome Powell’s Jackson Hole speech at the end of August.

Only two of the 96 analysts surveyed by Bloomberg are currently predicting a full-point move this month.

“The idea that the Fed will raise rates and immediately cut again in mid-2023 should now be put back into storage alongside the beach chairs,” said Gargi Chaudhuri,  head of iShares investment strategy for the Americas at BlackRock Inc. “Recent data have confirmed the necessity of the Fed’s tough stance. We believe we are entering a new regime of structurally higher volatility and slowing growth.”

Nouriel Roubini, who correctly predicted the financial crisis, sees a “long and ugly” recession occurring at the end of 2022 that could last all of 2023 and a sharp correction in the S&P 500. “Even in a plain vanilla recession, the S&P 500 can fall by 30 per cent,” said the chairman of Roubini Macro Associates. In “a real hard landing,” which he expects, it could fall 40 per cent. 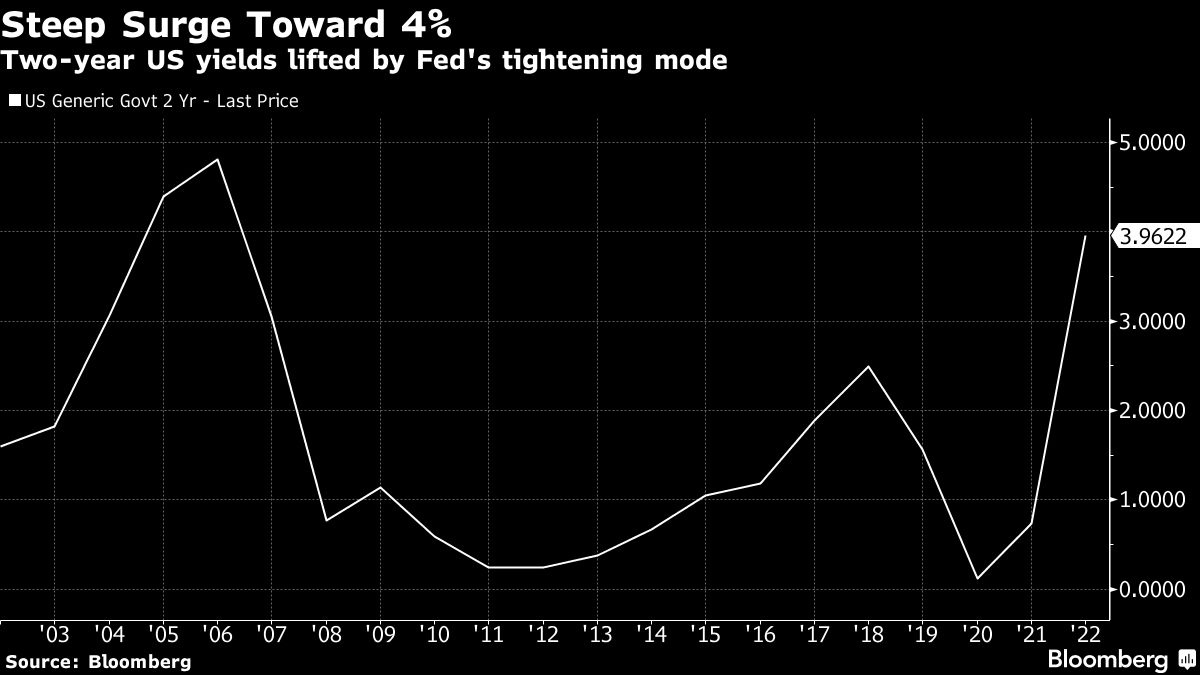 For traders grappling with a hawkish Fed and a looming recession, the next shoe to drop will be on corporate earnings, said a BlackRock co-chief investment officer.

“What we’re concerned about increasingly is earnings downgrades and we haven’t had that yet,” said Nigel Bolton of BlackRock Fundamental Equities, which comprises active stock strategies. “The tone of management teams is already starting to change and we’re going to see pretty substantial reductions for 2023,” he said.

Professional speculators are refusing to surrender to a punishing equity market prone to seemingly endless volatility -- boosting bullish and bearish positions at the fastest rate in five years. As the S&P 500 plunged last week, hedge funds snapped up single stocks while betting against the broad market with products like exchange-traded funds, data from Goldman Sachs Group Inc.’s prime brokerage show.

The appetite for protection against an index-wide drop in the S&P 500 in the next three months has been falling together with the stock market, pushing the put-to-call ratio to a fresh one-year low, data compiled by Credit Suisse Group AG’s derivatives strategists show. The opposite has been happening on a single-stock level: A similar ratio jumped to a one-year high as company-specific announcements have been triggering outsized stock reactions.

The risk-off sentiment on Tuesday also dragged down cryptocurrencies, with Bitcoin sinking below US$19,000.

The US needs to either regulate the existing stablecoin market or create its own Fed-backed digital currency to preserve the dominance of the dollar, a panel of experts said at a House hearing Tuesday.