US stocks suffered a third weekly loss after jobs data did little to alter views on the Federal Reserve’s next policy move.

The S&P 500 contended with its longest weekly losing streak since mid-June, as the central bank’s hawkish chorus grew louder in recent days. The index also ended Friday lower, erasing the gains it notched earlier in the session after the jobs report showed some signs of easing in a still-tight American labor market. A delay in the opening of a key gas pipeline to Europe bruised sentiment in the afternoon, ahead of a three-day weekend for American markets.

Treasuries rallied on Friday, led by short maturities. The policy-sensitive two-year yield ended the week nearly where it began, after topping 3.5 per cent earlier. 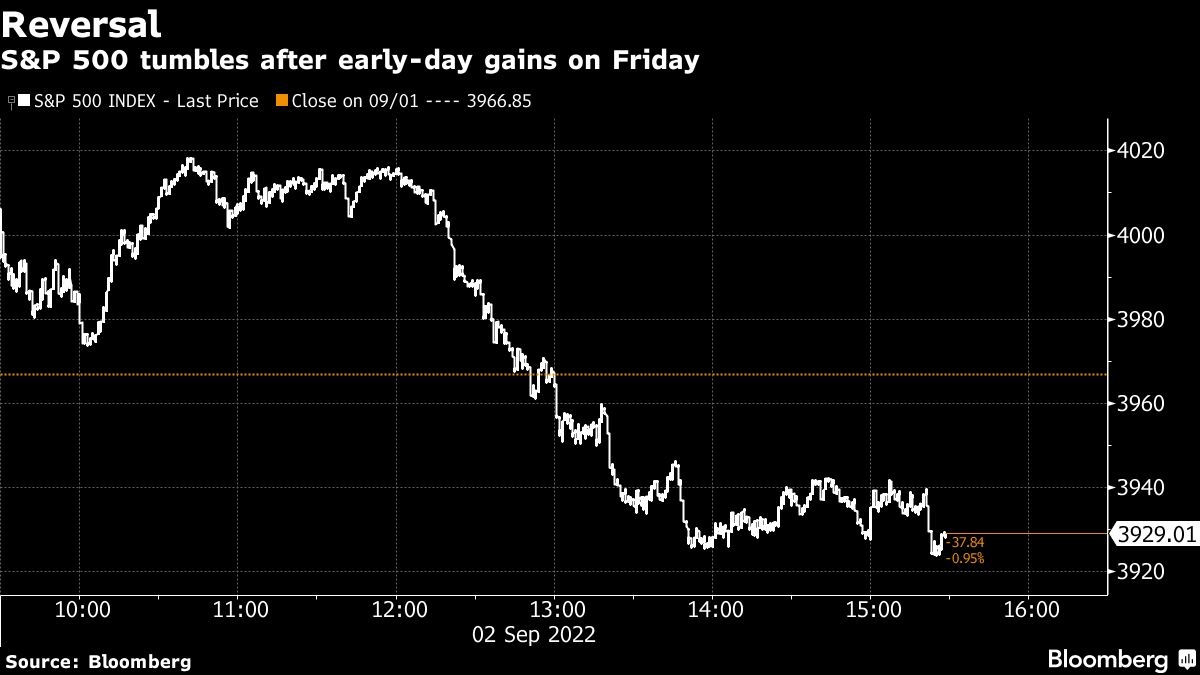 The labor-market data on Friday add to a bevy of reports this week that validate the Fed’s assertion that the economy is robust enough to withstand more tightening. Risk assets have been under pressure since Fed Chair Jerome Powell made clear the central bank will raise rates further and keep them elevated until price gains slow. Despite the reassuring report, markets are still pricing in the likelihood of a three-quarters of a percentage point interest-rate hike this month.

“Unemployment remains relatively low, but the cause may be minimal labor force participation rather than a booming economy,” said Richard Flynn, managing director at Charles Schwab UK. “Investors will be mindful that jobs reports are a lagging indicator that are often strong heading into a recession. Indeed, broader economic indicators have been weakening recently.”

Meanwhile, in a massive blow to Europe, Russia’s Gazprom PJSC said its key gas pipeline to Europe can’t reopen as planned on Saturday as a new technical issue has been discovered. The news moves the region a step closer to blackouts, rationing and a severe recession.

Investors are already concerned about the European Central Bank possibly raising rates by three-quarters of a percentage point next week. That, combined with the restriction of natural gas supplies and escalating US-China tensions has worried investors, said Sam Stovall, chief investment strategist at CFRA Research.

Traders “don’t want to take extended long positions and thereby potentially be exposed over the long weekend,” he said.

Concern that rising rates will hurt growth has already weighed on markets, pushing global bonds into their first bear market in a generation. The Bloomberg Global Aggregate Total Return Index of government and investment-grade corporate bonds down more than 20 per cent from a 2021 peak.