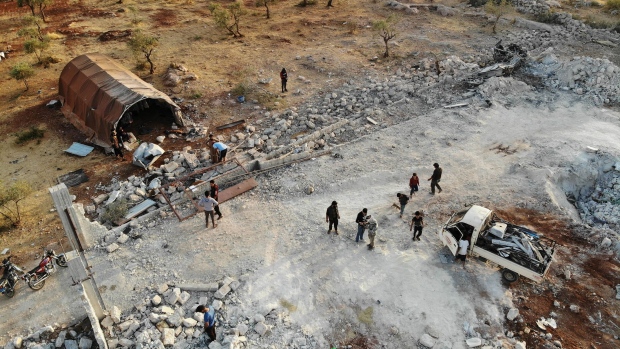 An aerial view taken on on October 27, 2019 shows the site that was hit by helicopter gunfire which reportedly killed nine people near the northwestern Syrian village of Barisha in the Idlib province along the border with Turkey. , Omar Haj Kadour/AFP via Getty Images

Islamic State leader Abu Bakr al-Baghdadi was under surveillance for weeks and evaded “two or three” American strikes before blowing himself up as U.S. special forces stormed his northern Syrian hideout.

As described in unusual detail by President Donald Trump on Sunday, the final moves to eliminate a man he described as the world’s most-wanted terrorist took shape while the president was at the Camp David presidential retreat Saturday morning, and ended with him and top officials following the raid via live video at the White House.

At a briefing on Sunday, Trump spoke openly about U.S. coordination with Russia and Turkey, the number of helicopters used -- eight -- and clues about flight paths. In contrast, he said he hadn’t briefed Congressional leaders beforehand, citing a fear of leaks that could endanger the mission.

“From the first day I came to office, and now we’re getting close to three years, I would say ‘where’s al-Baghdadi, I want al-Baghdadi,’ ” Trump told reporters at the White House. “He died like a dog, he died like a coward, he was whimpering, screaming and crying.”

As U.S. forces got ready to move on the compound, Trump arrived at the White House by motorcade at about 4 p.m. on Saturday from his golf course in Virginia, where he’d traveled from Camp David via helicopter to golf with Senator Lindsey Graham and others. Vice President Mike Pence, National Security Adviser Robert O’Brien, Defense Secretary Mark Esper and military leaders joined Trump in the Situation Room as U.S. forces closed in with a mission to kill or capture al-Baghdadi.

“He died after running into a dead-end tunnel, whimpering and crying and screaming all the way.”

The group watched in real time over a period of two hours as the helicopters landed, U.S. special forces assaulted the compound, and word came that al-Baghdadi was dead after detonating a explosive vest.

“I knew from that moment America was safer as a result,” Pence said Sunday on CBS’s “Face the Nation.”

Pence said he and Trump were informed Thursday afternoon there was a “high probability” that al-Baghdadi would be at the compound. After being presented with a plan on Friday, Trump approved the mission on Saturday morning, based on “actionable intelligence,” Pence said.

“We knew a little bit about where he was going, where he was heading,” Trump said. Two or three earlier efforts were canceled off because al-Baghdadi “decided to change his mind, constantly changing his mind.”

The U.S. gave advance notice to Russia that its forces were going in, though the purpose wasn’t given. The mission involved a 70-minute flight for U.S. forces that included crossing through areas with Turkish and Russian presence, Trump said. He didn’t disclose where the forces flew from.

Russia’s Defense Ministry, though, said it had no reliable information on a U.S. operation in northern Syria’s Idlib zone, which is controlled by Turkey, and questioned whether al-Baghdadi was dead.

Trump said U.S. forces landed via helicopters accompanied by gunships, and surrounded the compound, which the U.S. knew had a number of tunnels, most of them dead ends.

U.S. forces “blew holes into the side of the building,” avoiding the booby-trapped front entrance, and suppressed local gunfire, he said. They rescued 11 children and killed a yet unspecified number of adults.

Baghdadi ran into a dead-end tunnel with three of his children and detonated an explosive vest, killing himself and the children. “He died after running into a dead-end tunnel, whimpering and crying and screaming all the way,” Trump said. No U.S. forces were injured or killed, though a military dog was hurt, Trump said. “A beautiful dog, a talented dog -- was injured and brought back,” he said.

“We had visual confirmation on the ground, and certainly the DNA confirmation,” Esper said.

Trump said he would reach out to family members of U.S. citizens killed by Islamic State in recent years, including journalists James Foley and Steven Sotloff.

“The thug who tried so hard to intimidate others spent his last moments in utter fear, in total panic and dread, terrified of the American forces bearing down,” Trump said.