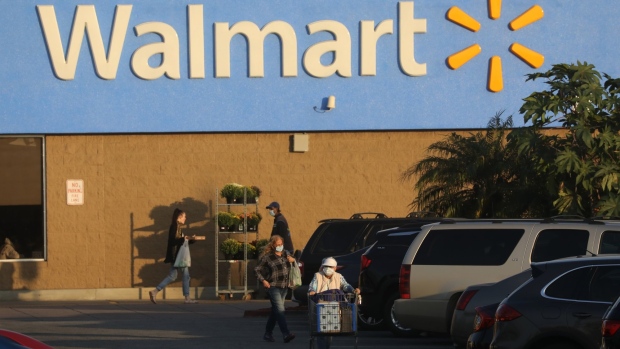 Shoppers wearing protective masks return to their vehicles outside a Walmart store in Duarte, California, U.S., on Thursday, Nov. 12, 2020. Walmart Inc. is scheduled to release earnings figures on November 17. , Bloomberg

The U.S. government accused Walmart Inc. of fueling a nationwide opioid crisis by ignoring warnings from its own pharmacists that the chain wasn’t properly set up to screen painkiller prescriptions in violation of federal regulations.

The complaint filed Tuesday in Delaware comes two months after the world’s largest retailer filed its own case in Texas accusing the U.S. of scapegoating Walmart for government failures in dealing with the crisis. More than 400,000 Americans’ deaths have been tied to legal and illegal opioid-based drugs over the last two decades.

In the new case, the U.S. alleges the retailer sought to boost profits with a system designed to make it almost impossible for overworked store pharmacists to catch red flags about overly large numbers of painkiller prescriptions. Walmart is in the unusual position of serving as the distributor of opioid-based medicines to its own stores.

“Given the nationwide scale of those violations, Walmart’s failures to follow basic legal rules helped fuel a national crisis,” the U.S. said in the complaint filed in federal court in Wilmington.

The suit is a blow for Walmart after it recently began opening its own low-cost health clinics, with plans to expand them in Georgia and the Chicago area. The retailer is also getting into the insurance business, and said it would start selling Medicare plans in October through its own licensed brokerage, Walmart Insurance Services.

“The Justice Department’s investigation is tainted by historical ethics violations, and this lawsuit invents a legal theory that unlawfully forces pharmacists to come between patients and their doctors, and is riddled with factual inaccuracies and cherry-picked documents taken out of context,” Walmart said in an emailed statement.

The Bentonville, Arkansas-based company is already a target of more than 2,000 suits filed by states, cities and counties, which claim the retailer intentionally turned a blind eye to suspicious prescribing of painkillers by doctors and profiting from opioid addictions and overdoses. The U.S. lawsuit boosts the pressure on the company.

Walmart and pharmacy chains such as Rite Aid Corp. and Walgreens Boots Alliance Inc. are facing a trial next year in federal court in Cleveland over the allegations. The case had been set for November, but was delayed by the coronavirus outbreak.

The wave of litigation has prompted at least three makers of opioid-based painkillers to seek bankruptcy protection to deal with the lawsuits. One of them, Purdue Pharma, also pleaded guilty to criminal charges tied to the illegal marketing of its OxyContin painkiller. Members of the billionaire Sackler family -- which owns Purdue -- also agreed to pay US$225 million to settle potential civil claims against them personally.

Opioid distributors McKesson Corp, Cardinal Health Inc. and AmerisourceBergen Corp -- along with ex-opioid maker Johnson & Johnson -- have negotiated a proposed US$26 billion-dollar settlement with a group of state attorneys generals suing to recoup billions in tax dollars spent on the opioid epidemic’s fallout. That deal has yet to finalized.

In their suit, Justice Department lawyers contend Walmart executives set up a system that turned its 5,000 in-store pharmacies into one of the country’s biggest suppliers of highly addictive opioid painkillers. The chain used low prices to lure customers and then demanded pharmacists pick up the pace of filling prescriptions, leaving little time for proper monitoring, according to the suit.

While Walmart collected such data, it didn’t share information about “problem prescribers” with its pharmacists or federal regulators and ignored their staffers’ alerts about such practices, the Justice Department said in the suit.

“As a wholesale drug distributor, Walmart had an obligation to notify” federal regulators “of suspicious orders of controlled substances,” Acting U.S. Attorney for the Eastern District of New York Seth DuCharme said in a statement. His office was involved in putting the suit together. “Walmart failed to comply with both of its obligations, and thereby failed in its responsibility to prevent the diversion of controlled substances,” he added.

Justice Department lawyers in Texas had launched a criminal investigation about Walmart’s handling of opioid painkillers and were prepared to bring charges, according to media reports. But the Justice Department’s top officials decided in 2018 to defer in bringing a criminal case and file suit instead.

--With assistance from Leslie Patton and Christopher Yasiejko.