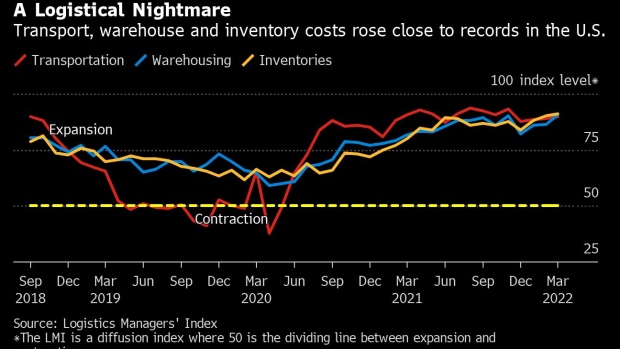 The Logistics Managers’ Index, released Tuesday, advanced for a third straight month in March, reaching 76.2 from 75.2 in February. The monthly survey, compiled by researchers at Colorado State University and affiliated with four other American universities, asks logistics managers for their views on inventories, warehousing and transportation.

Inventory levels dipped to 75.7 from February’s high of 80.2, though their costs rose to a record 91, according to the report. Warehouse capacity suffered a “a rather precipitous drop” in March, pushing prices for storage space to an all-time peak of 90.5.

The report highlighted some of the crosscurrents underpinning the U.S. economy, where inflation is becoming more entrenched and threatening to hurt consumer demand. Firms that boosted stockpiles amid global supply uncertainty, meanwhile, are trying to assess whether they’ve overbought or whether the added cushion is a more permanent feature.

Goods “continue to trickle into the U.S. but are finding less consumer interest than anticipated,” the researchers said. One explanation “is that the continued fears about inflation may have led firms to build inventories as a hedge against higher future costs.”

It’s possible, they said, that recent supply-chain challenges “may have taught manufacturers, suppliers, retailers, and customers that holding inventory provides an important element of safety in uncertain times.”

In transportation, prices were little changed from a month earlier, utilization rose and capacity edged higher -- perhaps not yet reflecting signs of weakness in the second half of March.

“The high costs of fuel may end up being the thing that finally slows down the runaway transportation market,” the report states. “The future transportation capacity metric will be the one we watch most closely in April, as it is likely to be among the first to demonstrate any concrete signs of softening in the freight market.”