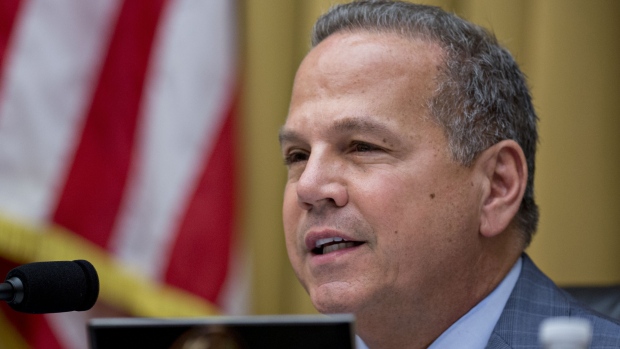 Representative David Cicilline a Democrat from Rhode Island and chairman of the House Judiciary Antitrust, Commercial and Administrative Law Subcommittee, makes an opening statement during a hearing in Washington, D.C., U.S., on Tuesday, March 12, 2019. Today's hearing marks the third time executives for T-Mobile US Inc. and Sprint Corp. have to defend their $26 billion merger before Congress as opponents of the deal continue to urge regulators to block it. Photographer: Andrew Harrer/Bloomberg , Bloomberg

Four of the biggest U.S. technology giants came under rapid-fire interrogation from lawmakers who accused the companies of using their power to squash rivals and thwart competition.

Alphabet Inc.’s Google, Facebook Inc. and Apple Inc. and Amazon.com Inc. were criticized at a House hearing Wednesday for the power they wield over digital markets: Google’s control over internet search; Apple’s power over apps; Facebook’s acquisition of rivals; and Amazon’s leverage over third-party sellers.

“Their ability to dictate terms, call the shots, upend entire sectors, and inspire fear represent the powers of a private government,” said Representative David Cicilline of Rhode Island, who is leading a House investigation into the companies. “Our founders would not bow before a king. Nor should we bow before the emperors of the online economy.”

The chief executives of the four companies -- Alphabet’s Sundar Pichai, Facebook’s Mark Zuckerberg, Apple’s Tim Cook and Amazon’s Jeff Bezos -- testified before the House antitrust committee as it nears the end of a yearlong investigation of competition problems in the industry.

The hearing marks an escalation of antitrust scrutiny in the sector, with the internet platforms -- which have a combined value of nearly $5 trillion -- already under investigation by two federal agencies as well as states across the country. The testimony and documents elicited by the panel could also be used to inform those inquiries.

Cicilline attacked Pichai over the practices of his Google unit’s search engine, accusing it of stealing content with the goal of keeping users on its site, rather than directing them to other sources on the web.

“The evidence seems very clear to me as Google became the gateway to the internet it began to abuse its power,” he said. “It used its surveillance over web traffic to identify competitive threats and crush them.” Any business that wants to be found on the web, he added, “must pay Google a tax.”

At the start of the hearing, Zuckerberg, Pichai and Cook drew the toughest questioning from lawmakers, while Bezos wasn’t asked anything, though that could have been because of a technical issue with his feed. Wednesday’s session is the first time Bezos has testified before Congress and the hearing marks the first time all four tech leaders have appeared together.

Democrats split up their questions to focus on the market power of Google, Facebook and Apple while Republicans largely complained about anticonservative bias at Google and Facebook.

“I’ll just cut to the chase: Big tech is out to get conservatives,” he said. “That’s not a suspicion, that’s not a hunch, that’s a fact.”

Jerrold Nadler of New York, the Democrat who chairs the House Judiciary Committee, said documents obtained by the committee showed Facebook bought Instagram in 2012 to “neutralize” an emerging competitor. He asked why Instagram shouldn’t be broken off from Facebook.

“Facebook saw Instagram as a threat that could potentially siphon business away from Facebook,” Nadler said. “And so rather than compete with it, Facebook bought it. This is exactly the type of anti-competitive acquisition that the antitrust laws were designed to prevent.”

Zuckerberg said Instagram faced many competitors at the time and that Instagram succeeded because of Facebook’s investments.

Democrat Pramila Jayapal of Washington questioned Bezos about Amazon’s use of data about third-party sales to compete against those vendors. Bezos said the company has a policy against using seller-specific data to aid its private-label business, but “can’t guarantee the policy has never been violated.”

“You have access to data that far exceeds the sellers on your platform with whom you compete,” Jayapal said. “You can set the rules of the game for your competitors but not actually follow these same rules for yourself.” Media reports found that policy had been violated.

After more than two hours of interrogations, the CEOs are expected to face even more rounds of tough questions from lawmakers before the hearing wraps up. Cicilline is expected to issue a report recommending ways to strengthen the antitrust laws that failed to rein in the tech giants.

In written testimony released late Tuesday, the CEOs told Congress that competition is thriving across the tech industry and consumers are benefiting as a result.

“The global retail market we compete in is strikingly large and extraordinarily competitive,” Bezos said in his statement. “Unlike industries that are winner-take-all, there’s room in retail for many winners.”

They touted the various ways they help small businesses grow, whether third-party sellers on Amazon or independent developers that build apps for the Apple App Store. They also portrayed their companies as embodying American entrepreneurship.

Zuckerberg said competition is so fierce that he expects one day a product will replace Facebook -- and he wants Facebook to build it. He also positioned the debate over the tech companies as a geopolitical issue, warning that efforts to break up or limit the reach of American companies could open the door to Chinese competitors.

“We believe in values -- democracy, competition, inclusion and free expression -- that the American economy was built on,” Zuckerberg said in his statement. “There’s no guarantee our values will win out. For example, China is building its own version of the internet focused on very different ideas, and they are exporting their vision to other countries.”

The hearing is the clearest sign yet of the intense scrutiny the four companies face in Washington. While the committee’s inquiry is focused on competition, the companies are also grappling with criticism over privacy breaches, election misinformation, the spread of racist content -- and in the case of Amazon, its treatment of workers during the pandemic.

—With assistance from Naomi Nix.