I think we’re a long way from seeing a substantial push up in interest rates: John Zechner

U.S. stocks rose to the first all-time high since Sept. 2, powered by a spate of strong corporate results and positive news on the fight against the virus.

The mood soured after the cash session, when Snap Inc. plunged more than 25 per cent after reporting results that missed estimates. The owner of the Snapchat app was weighed down by Apple Inc.’s new data collection restrictions and their effect on digital advertising measurements. The main exchange-traded fund tracking the Nasdaq 100 lost 06. per cent, as other social media stocks slumped in afterhours, with Facebook Inc. and Twitter Inc. each down 6 per cent. Alphabet Inc. slid almost 3 per cent.

Intel Inc. also sank after reporting results, helping to overshadow a late-session rally that had lifted the S&P 500 0.3 per cent for a seventh straight gain, the longest streak since July. Shares in stocks that benefit from a strong economy rallied after better-than-expected earnings at Tesla Inc., Pool Corp. and Tractor Supply Co.

The gains during regular trading ended the longest drought without a record close since November 2020. The S&P 500 has climbed 5 per cent since JPMorgan Chase & Co. kicked off reporting season, following a month of losses. The steady rise in stocks sent the Cboe Volatility Index to its lowest close since before the pandemic.

“I think it’s OK that investors are looking at earnings and going through them with a very fine-toothed comb,” Liz Young, head of investment strategy at SoFi, said on Bloomberg’s “QuickTake Stock” streaming program. “We’re in a time-period where we are finally, it seems like, going to shift away from markets that are driven by monetary policy and back to markets that are driven by fundamentals.”

Market-implied expectations for U.S. inflation for the next half-decade have surged to the highest in 15 years as more investors have been losing faith in the Federal Reserve narrative that rising prices will be “transitory.” 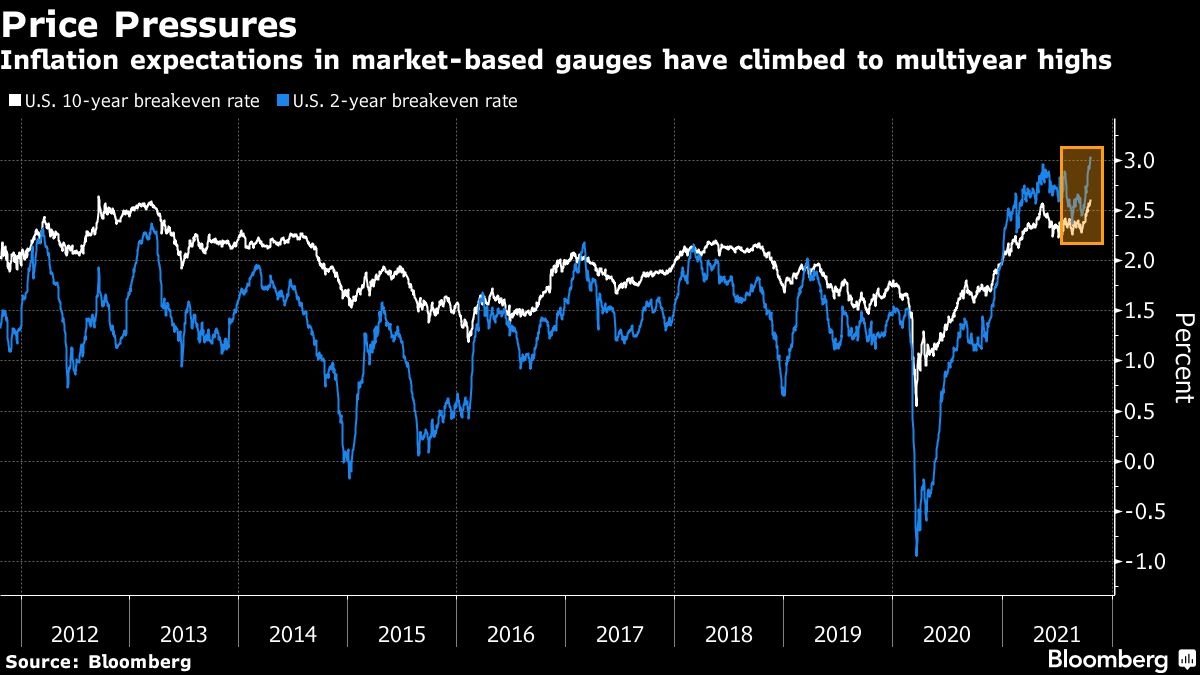 The five-year Treasury yield climbed above 1.21 per cent, the highest since February 2020, as traders increased their bets the Fed may tighten policy sooner than expected. Solid economic reports on Thursday also strengthened predictions. The latest jobless claims report unexpectedly declined to the lowest since March 2020. Sales of previously owned U.S. homes also rose in September by the most in a year.

Meanwhile, Congressional Democrats are at odds over both the tax and spending aspects of President Joe Biden’s economic package.

“Good jobs plus high inflation creates a significant one-two punch against the Fed’s accommodative stance,” said Mike Loewengart, managing director of investment strategy at E*Trade Financial. “Easing and even rate increases down the road could start to be accelerated if we see more momentum like this, which perversely could create headwinds for the market.”

With stocks at highs, traders are braced for swings in the market while also keeping a close eye on company margins, pricing power and outlooks.

“At a stock level, you really need to focus on companies that have pricing power” and can pass along costs, Steve Chiavarone, vice president and general manager at Federated Global Investment, said on Bloomberg TV’s “Surveillance.” “If you can’t, and it starts eating away at your margin, I think you need to expect to get punished.”

Crude oil slipped, the dollar was stronger against peers and Bitcoin fell from an all-time peak.