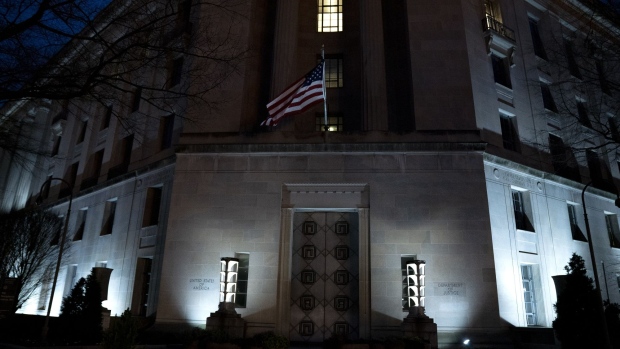 The U.S. Department of Justice (DOJ) headquarters in Washington, D.C., U.S., on Friday, Jan. 8, 2021. House Democrats are prepared to impeach President Donald Trump if he doesn’t immediately resign, House Speaker Nancy Pelosi said, as the president came under increasing pressure from members of both parties for encouraging a mob that stormed the U.S. Capitol. Photographer: Stefani Reynolds/Bloomberg , Bloomberg

(Bloomberg) -- President Joe Biden says his administration is focused on policing cryptocurrency crimes to combat corruption globally and is taking advantage of a newly formed Department of Justice task force, according to an anti-graft report released Monday.

The White House is particularly focused on crimes committed by virtual currency exchanges, mixing and tumbling services -- platforms that obscure owners and recipients in Bitcoin transactions -- and bad actors who facilitate money laundering, according to the report from U.S. Strategy on Countering Corruption, which includes the State Department, Treasury and Justice Department.

The Department of Justice task force, the National Cryptocurrency Enforcement Team, was announced in October and reports to Kenneth A. Polite Jr., assistant attorney general for the Criminal Division.

Law enforcement and financial regulators have repeatedly raised concerns that the burgeoning asset class is a means for bad actors to launder criminal proceeds. Regulators have expressed concerns about the lack of investor protections and possible risks to financial stability as the market has ballooned to more than $2 trillion.