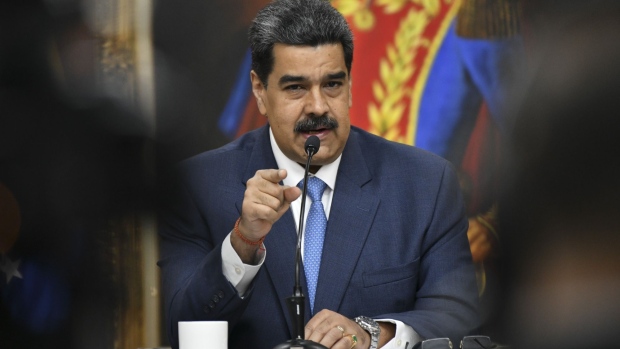 Nicolas Maduro, Venezuela's president, speaks during a press conference at Miraflores Palace in Caracas, Venezuela, on Friday, Feb. 14, 2020. "The day the courts of the Republic order Juan Guaido's detention for the crimes he has committed, he will go to jail, rest assured," Maduro said. Photographer: Carlos Becerra/Bloomberg , Bloomberg

(Bloomberg) -- The U.S. is poised to indict Venezuelan President Nicolas Maduro and other key aides as the Trump administration ramps up pressure on an adversary it has sought to push aside, according to sources familiar with the decision.

President Donald Trump and top U.S. officials have long sought to oust Maduro’s regime but have so far failed to replace him with the opposition leader they support, National Assembly President Juan Guaido. The charges, which were reported earlier by CNN and the Miami Herald, will be related to drug trafficking, the people said.

About $2 billion worth of cocaine, about a quarter of what’s produced in Colombia in a year, passes through Venezuela before making its way to other countries last year, according to Jeremy McDermott, co-founder of Insight Crime, a research group that studies organized crime.

There’s evidence that the criminal groups that transport these drugs have infiltrated Venezuelan government security forces, forming a network known as the ‘Cartel of the Suns’ to facilitate the passage of illicit drugs into and out the country, according to a 2019 report by the United Nations’ International Narcotics Control Board.

The indictment against Maduro, a sitting head of state, would be the first since the U.S. issued charges against former Panamanian strongman Manuel Noriega. Noriega was eventually captured and sentenced to prison after then-President George H.W. Bush sent troops to the country to bring him to justice.