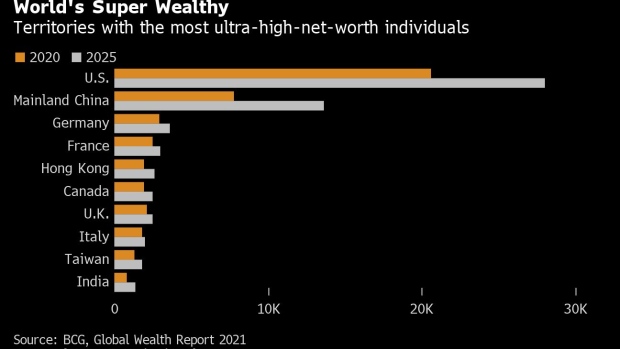 The cabin of an Airbus ACJ319neo private jet is seen during the National Business Aviation Association Annual Convention in Henderson, Nevada, U.S., on Monday, Oct. 21, 2019. The event brings together key aviation contacts from around the world, including current and prospective business aircraft owners, manufacturers and customers into one meeting place. Photographer: Bridget Bennett/Bloomberg , Bloomberg

(Bloomberg) -- The U.S. will remain the global hot spot for the world’s super-rich in the near future even as the fortunes of Asia’s wealthy continue to grow, according to research from Boston Consulting Group.The number of ultra-high-net-worth individuals in the U.S. will increase 36% to about 28,000 in 2025 compared with last year, the firm said in its 2021 Global Wealth Report released Thursday. China and India should lead percentage growth of fortunes worth $100 million or more for the same period by almost doubling the number of ultra-wealthy individuals to 13,600 and 1,400, respectively, according to the report. There are currently 60,000 ultra-high-net-worth individuals worldwide with a combined $22 trillion.