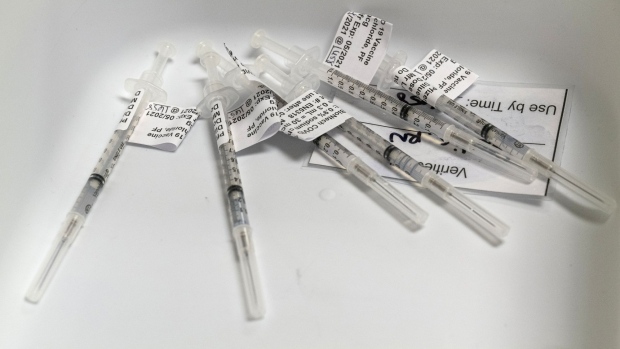 Syringes filled with doses of the Pfizer-BioNTech Covid-19 vaccine at a large scale vaccination site in Sacramento, California. , Bloomberg

(Bloomberg) -- President Joe Biden’s administration will use half of the money the U.S. pledged to Covax -- $2 billion -- to help pay for the 500 million coronavirus vaccine doses it has promised to lower-income countries, officials familiar with the plan said.

The funds make up more than half of the roughly $3.5 billion the U.S. will pay for the doses, which are being bought at-cost and are expected to begin shipping in August, according to the officials, who spoke on condition of anonymity.

Biden announced Thursday that he would buy 500 million Pfizer Inc. doses to donate to 92 lower-income nations. About 200 million of the U.S.-made doses will ship by the end of the year, with the remainder shipping in 2022, the White House said.

Biden’s initial Covax pledge was $2 billion, plus another $2 billion intended to be distributed to match donations from other nations. The plan described by the officials on Thursday would reallocate $2 billion to instead buy vaccines directly.

The U.S. plans on allocating the doses itself, but the White House said in a statement Thursday that it would be “working through Covax” to do so. Biden’s administration has previously announced that it would donate about 19 million doses through Covax, but that the U.S. was retaining final say over which countries receive them.