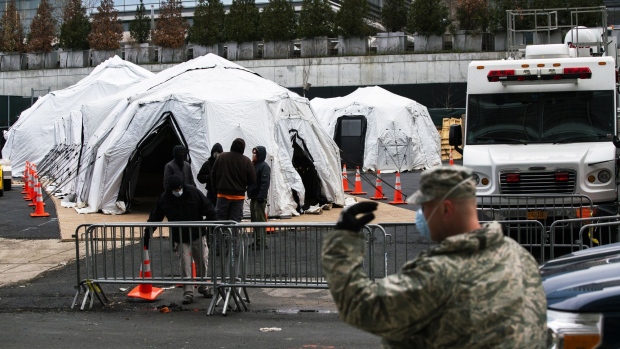 Workers and members of the National Guard build a makeshift morgue outside of Bellevue Hospital on March 25, 2020 in New York City. , Photographer: Eduardo Munoz Alvarez/Getty Images

Subscribe to a daily update on the virus from Bloomberg’s Prognosis team here.

Click VRUS on the terminal for news and data on the coronavirus and here for maps and charts. For analysis of the impact from Bloomberg Economics, click here. To see the impact on oil and commodities demand, click here.

President Donald Trump said the U.S. is conducting about 100,000 tests a day for the coronavirus after weeks of complaints from governors and health-care workers about a scarcity of tests.

The president, in a White House news briefing, also questioned whether New York will need as many ventilators as Governor Andrew Cuomo is seeking, saying the state’s projections could be “extremely high.”

Cuomo said Friday that New York may need as many as 40,000 of the medical devices to treat patients in critical condition in the state, which is the center of the U.S. outbreak.

The U.S. Army Corps of Engineers is scouting more than 110 facilities to use as field hospitals to treat Covid-19 patients or as overflow space to transfer people who don’t have the virus, Lieutenant General Todd T. Semonite, commander of the corps, said in a news conference.

Locations are being considered in all 50 states and five territories, Semonite said. The Army Corps will transform the McCormick Place Convention Center in Chicago to a 3,000-bed hospital by April 24, he said. Construction for a hospital has already begun at New York’s Jacob K. Javits Convention Center.

The Sleep Train Arena in Sacramento could have 360 beds for both Covid and non-Covid patients, Semonite said.

The U.S. became the first country to surpass 100,000 confirmed cases of the coronavirus on Friday, a day after it overtook China to become the largest outbreak in the world. America’s most prominent hot spots are New York and New Jersey, which together account for half the country’s total cases. California has more than 4,000, and smaller outbreaks in Illinois and Michigan continue to gain traction.

Los Angeles could see a coronavirus surge similar to New York City’s in five days if the spread continues at the rate it’s been going, Mayor Eric Garcetti said.

“We will have doctors making excruciating decisions,” Garcetti said at a press briefing alongside Governor Gavin Newsom. They spoke in front of the U.S. Navy hospital ship Mercy, which docked in Los Angeles to lend extra medical space for non-coronavirus needs. It will be the largest hospital in the city, Garcetti said.

Rhode Island police, aided by the National Guard, on Saturday will conduct house-to-house searches to find people who traveled from New York to demand they begin 14 days of self-quarantine. State police are already stopping cars with New York license plates.

“Right now we have a pin-pointed risk,” Governor Gina Raimondo said. “And that risk is called New York City.”

Raimondo, a Democrat, said she consulted lawyers and while she couldn’t close the border, she felt confident she could enforce a quarantine. Many New Yorkers have summer houses in the state, especially in tony Newport, and the governor said authorities would be checking there.

President Donald Trump signed the largest stimulus package in U.S. history, a $2 trillion aid bill intended to rescue the economy. The plan will provide a massive injection of loans, tax breaks and direct payments to large corporations, small businesses and individuals whose revenue and income have plummeted under social distancing restrictions.

Carnival Corp.’s Holland America line said four passengers died on its Zaandam ship, which has had an outbreak of flu-like symptoms on board, including at least two confirmed cases of Covid-19. The cruise line said the passengers were “older” but didn’t say how they died.

The Zaandam, currently near Panama, was still at sea when cruise companies halted new voyages earlier this month.

“Our negotiations with GM regarding its ability to supply ventilators have been productive, but our fight against the virus is too urgent to allow the give-and-take of the contracting process to continue to run its normal course. GM was wasting time,” Trump said in a statement. “Today’s action will help ensure the quick production of ventilators that will save American lives.”

GM and ventilator maker Ventec Life Systems Inc. had much of what they needed in place to ramp up production of the breathing machines. They were just waiting on the Trump administration to place orders and cut checks.

Belgium extended restrictions on citizens and businesses, which took effect March 14, by two weeks until April 19, and Prime Minister Sophie Wilmes signaled a further extension to May 3, saying it’s too early to declare the epidemic under control. Belgians must stay at home except for essential activities such as grocery shopping. Gatherings by more than two people are banned and stores selling non-essential goods remain closed.

New York is seeking federal assistance for four new emergency hospitals, Governor Andrew Cuomo said, as the number of state deaths spiked 35% in a day to more than 500.

The new sites would join four centers the U.S. is setting up in the city, he said. The state wants more beds for Nassau, Suffolk and Westchester counties. Cuomo spoke from the Jacob K. Javits Convention Center on Manhattan’s west side, which is being converted into a 1,000-bed emergency hospital that will open Monday.

Cuomo said current demand for medical equipment is adequately covered and that the state is stockpiling additional supplies for a potential peak of infections three weeks from now. “We don’t need them yet,” he said. “We need them for the apex.”

The governor said he would keep the state’s schools closed for an additional two weeks, at which time the situation will be reassessed.

Luxembourg is in an intensive planing phase to be among the first nations to research so-called herd immunity based on new blood tests the country is expecting to get, Health Minister Paulette Lenert said Friday.

The new tests wouldn’t check for Covid-19 infections but whether people have developed immunity against the new virus. Luxembourg, due to its small population of just over 600,000 people, is in a fortunate position to do this, the minister said. Scientists would be able to test samples that would be representative of the entire population, the minister said.

Italy had its highest daily death toll even as the number of new cases declined on Friday. Fatalities shot up to 969, the most in a 24-hour period since the start of the outbreak.

New infections totaled 5,959, compared with 6,153 the previous day, civil protection authorities said at their daily news conference in Rome. Italy now has 86,498 total cases, roughly the same number as the U.S. and more than China, where the disease’s first outbreak occurred.

President Donald Trump said the federal government bought “many ventilators” from several companies he didn’t identify. Trump in a tweet said the names will be announced later.

State and local officials have been pleading with the federal government for more ventilators as cases of the coronavirus mount.

French Prime Minister Edouard Philippe said public confinement is being extended to April 15. The restrictions could be further extended if needed, he said in a press conference after a cabinet meeting on Friday. A scientific committee consulted by the government recommends at least six weeks of confinement, he said.

Libya reported its first case this week, meaning 21 of 22 Eastern Mediterranean nations have infections. The World Health Organization said Libya’s capacity to respond is extremely limited in some areas and non-existent in others, with a large movement of people from neighboring countries.

The outbreak also threatens to cause a catastrophe in Syria, the WHO said. Half of the nation’s hospitals are not functioning after nine years of war and thousands of health workers having fled the country. Millions of displaced people live in overcrowded camps in the country’s northwest, but after two days of tests using 300 WHO kits, no cases so far have been detected, the agency said.

Toyota Motor Corp.’s idled manufacturing facilities in the U.S. will make much-needed face shields and masks, and the Japanese automaker is closing in on deals with medical-device makers to help them boost production.

The carmaker said Friday it will start mass production of face shields early next week to supply hospitals near its plants in Indiana, Kentucky, Michigan and Texas. Toyota also said it is finalizing pacts with at least two companies to make breathing ventilators and respirator hoods, and it’s looking for partners to make protective masks. The company on Thursday extended its shutdown of North American factories for two weeks.

The number of people in the U.K. who have died from coronavirus increased by 31% to 759 as of Thursday, the Department of Health said. That’s higher than the five-day average of 20%.

“This is a public health crisis” and different from a typical recession, Bostic said on Bloomberg Television Friday. Kaplan offered a similar view a few minutes earlier. “We were strong before we went into this, and we believe that we’ve got a great chance to come out of this very strong,” he said.

Kaplan said unemployment would peak “in the low to mid teens” before recovering to around 7%-to-8% by year-end.

British Prime Minister Boris Johnson will self-isolate in Downing Street for seven days after a test found he had the coronavirus, spokesman James Slack told reporters on Friday. Health Secretary Matt Hancock has also contracted the illness, in a double blow to the U.K. government’s response to the crisis.

Both men have reported mild symptoms. Meals will be left at Johnson’s door while he continues to work by video-conference, Slack said. Hancock is self-isolating and working from home.

They are the latest high-profile individuals to contract the virus in Britain after Prince Charles, the heir to the throne, tested positive.