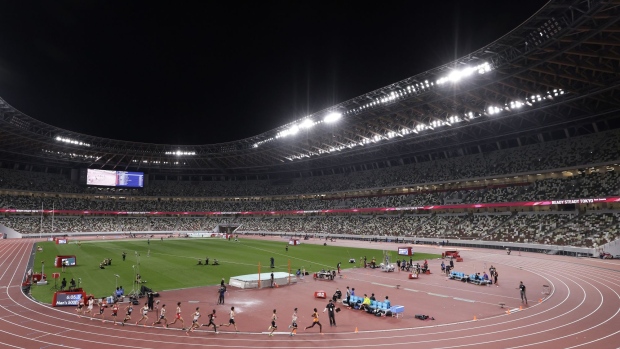 Athletes compete during an athletics test event for the Tokyo 2020 Olympic Games at the National Stadium in Tokyo, Japan, on Sunday, May 9, 2021. Japanese Prime Minister Yoshihide Suga extended a state of emergency that covers Tokyo and expanded it to two more regions hit by rising virus cases, in an attempt to stem infections ahead of the capital's hosting of the Olympics in less than three months. , Bloomberg

(Bloomberg) -- The U.S. national track & field team has canceled its training planned outside Tokyo for the 2020 Olympics due to safety concerns for the athletes, in another blow to the sporting event which has come under strong opposition from the Japanese public.

The U.S. team notified the decision last month to authorities in Chiba prefecture, located next to Tokyo, saying the pandemic would put athletes’ safety at risk, according to Takuya Iida, an official in charge of the training camps in the prefecture. The team had planned to train in July and August. Some other national teams have also canceled training camps for similar reasons, he said.

Earlier this week, International Olympic Committee President Thomas Bach postponed his trip to Japan this month after the government decided to extend the state of emergency in Tokyo and other areas due to concerns over a rise in virus cases.

Despite the infections, Japanese Prime Minister Yoshihide Suga, the Tokyo organizers as well as the IOC have repeatedly said the games will proceed from July 23 as planned in a safe environment. However calls from the Japanese public to cancel the event have been increasing, with nearly 60% of those surveyed voicing opposition in holding the event this summer, according to a Yomiuri poll published Monday. As of Wednesday, more than 330,000 people signed an online petition calling for the games to be called off.