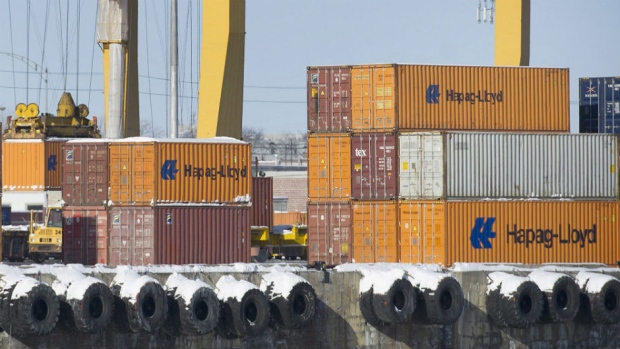 WASHINGTON - The U.S. trade deficit declined sharply in February as imports from China fell by a record amount and American exports rose for a third straight month.

The deficit fell to US$43.6 billion in February, 9.6 per cent below January's deficit of US$48.2 billion, the Commerce Department reported Tuesday. Exports rose a tiny 0.2 per cent to US$192.9 billion. Imports dropped 1.8 per cent to US$236.4 billion as the flow of Chinese goods tumbled by US$8.6 billion, led by a big drop in cellphone imports.

The politically sensitive trade deficit with China narrowed to US$23 billion, 26.6 per cent below the January total. President Donald Trump, who was sharply critical of Chinese trade practices during last year's presidential campaign, will hold his first meeting with Chinese President Xi Jinping later this week in Florida.

In a tweet last week, Trump said that his meeting at Mar-a-Lago with the Chinese leader would be "a very difficult one in that we can no longer have massive trade deficits and job losses."

During the campaign, Trump attacked China for pursuing unfair trade practices such as manipulating its currency. He said that if China did not reform, his administration would impose punitive tariffs on Chinese imports. So far, Trump has not followed through on those threats. But his meetings with Xi on Thursday and Friday could prove pivotal in determining the administration's future course in relations with China.

Trump often targeted China and Mexico for attacks on the campaign trail, blaming both nations for the loss of millions of good-paying U.S. factory jobs. Trump has said he will renegotiate the North American Free Trade Agreement with Mexico and Canada, which Trump called a "disaster" during the campaign. However, a draft letter that would begin the renegotiation process, which leaked last week, indicated that at least initially, Trump was taking a less combative approach in the renegotiations.

The small rise in exports in February was led by U.S.-made autos and autos parts, which climbed 1.5 per cent to the highest level since July 2014. Exports of petroleum products were up 8.6 per cent. Those gains helped offset declines in exports of commercial airplanes, farm products and industrial engines.

American manufacturers have struggled for more than a year with economic weakness in major export markets and a rising value of the dollar, which makes U.S. goods less competitive on foreign markets. However, economists believe both of those trends may ease in 2017, helping to lift the fortunes of American exporters.

The trade deficit is the difference between exports and imports. A larger deficit reduces overall economic growth because it means the country is buying more products from foreign producers rather than domestic companies. Last year's deficit was US$500.6 billion.

The deficit with Mexico shot up 46 per cent in February to US$5.8 billion while the deficit with Canada, the other partner in NAFTA, dropped 38.1 per cent to US$2.1 billion.