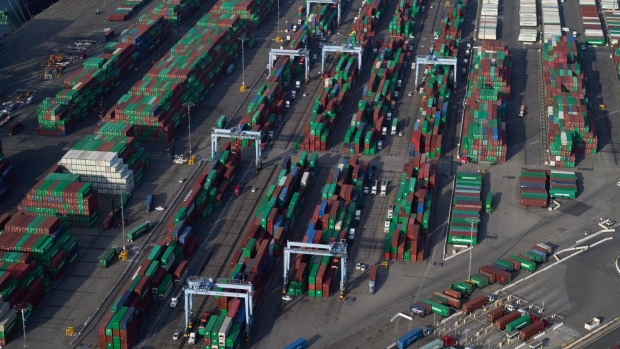 Shipping containers at the Port of Long Beach in Los Angeles, California. , Bloomberg

(Bloomberg) -- The U.S. trade deficit narrowed in October for the first time since July, reflecting a sharp increase in exports and suggesting that foreign demand for goods is on the rise.

The gap in trade of goods and services shrank 17% to $67.1 billion, from a revised $81.4 billion in September, according to Commerce Department data released Tuesday. The median estimate in a Bloomberg survey of economists was for a shortfall of $66.8 billion.

The value of goods and services exported rose 8.1% to $223.6 billion in October, the highest on record. The increase was led by stronger outbound shipments of industrial supplies such as crude oil.

Imports meanwhile, climbed 0.9% to $290.7 billion -- also a record -- led by shipments of automotive-vehicle parts and engines.

The increase in merchandise exports suggests that overseas economies are slowly recovering and demanding more goods from the U.S. That could suggest that trade puts less of a drag on U.S. economic growth in the coming months, after it subtracted 1.16 percentage points from gross domestic product in the third quarter.

Even so, lean inventories, snarled supply chains and transportation challenges continue to make it difficult for U.S. producers to meet demand for finished goods and supplies.