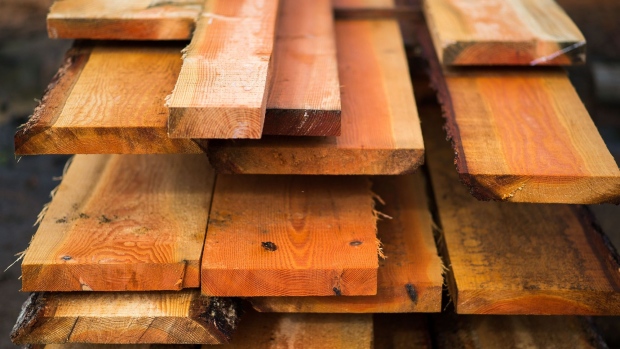 Freshly cut boards at a sawmill in Sooke, British Columbia, Canada, on Wednesday, Oct. 27, 2021. High lumber prices are back amid tight supplies and a pickup in homebuilding, even as the industry steps into what is normally a seasonal lull. Photographer: James MacDonald/Bloomberg , Bloomberg

(Bloomberg) -- As if things weren’t volatile enough in the lumber market, a Canada-U.S. trade tussle will make things worse.

Further tariffs on Canadian softwood lumber entering the U.S. will affect the market due to the “significant increase” in duties companies must pay, according to Resolute Forest Products Inc. Chief Executive Officer Remi Lalonde. His Montreal-based company paid $39 million in duties in the third quarter and the CEO sees the tariff rate on shipments to the U.S. jumping to 30% from 20%, likely before year end.

“It is an additional tax and therefore it’s an expense,” Lalonde said in a Thursday interview. “There aren’t a whole heck of a lot of producers who will be happy to run at cash negative levels.”

The Trump administration slapped tariffs on Canadian softwood lumber in 2017, saying Canada’s industry is unfairly subsidized. While the move supports U.S. producers, it adds to costs for domestic builders who get more than a quarter of their lumber from their northern neighbor.

“If demand were to soften, then people are going to have to decide whether they want to finance duties or just reduce their production capacity,” Lalonde said. “The duties are effectively forcing those hard decisions.”