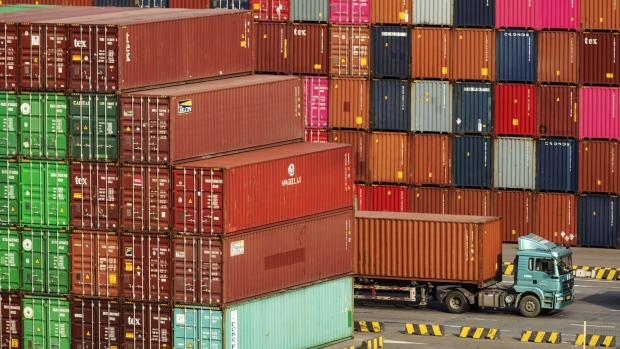 A truck stands next to shipping containers stacked at the Yangshan Deepwater Port, operated by Shanghai International Port Group Co. (SIPG), in Shanghai, China, on Friday, May 10, 2019. , Bloomberg

U.S. exports of goods to the Asian nation fell 2.7 per cent from the prior month while imports declined 1.9 per cent, narrowing the trade gap between the countries to a seasonally adjusted US$29.6 billion, according to data Wednesday from the Commerce Department. The overall U.S. deficit in goods and services trade shrank by less than estimated to US$54 billion, a three-month low.

China, the largest U.S. trading partner last year, has fallen behind both Mexico and Canada in 2019 amid the increasing tariffs and heightened uncertainty about when -- or if -- the trade war will be resolved. The conflict has muddled companies' supply chains and stymied plans for capital investment, with U.S. manufacturing in a recession in the first half and rising concern that a broader downturn is coming.

On top of that, a strong dollar and a weakening global outlook continue to damp demand for U.S. exports more broadly, though steady consumer spending is supporting imports.

While trade with China declined, U.S. merchandise imports and exports with Canada and Mexico were relatively little changed on the month.

The U.S.-China trade picture looked much different in July from now. Trump and Chinese leader Xi Jinping declared a tentative truce in late June, and U.S. Trade Representative Robert Lighthizer and Treasury Secretary Steven Mnuchin traveled to China for negotiations at the end of July.

Chinese and U.S. officials had yet to agree on a date for a visit to Washington this month, and the two countries still have not agreed on basic terms of re-engagement, according to reporting by Bloomberg News earlier this week.

So far this year, the U.S. merchandise deficit with China -- which Trump sees as an indicator the Asian nation is taking advantage of America -- has narrowed to a seasonally adjusted US$209.5 billion from US$234.9 billion in the same seven months of 2018. Exports have dropped 17.3 per cent while imports have tumbled 12.4 per cent.

On an unadjusted basis, the goods deficit with the European Union was a record US$20.1 billion in July, driven by an all-time high in imports, according to the report. That may give Trump more fodder for his repeated statements that the dollar is too strong against the euro and the Federal Reserve needs to cut interest rates more aggressively.

Net exports subtracted 0.72 percentage points from the annualized pace of gross domestic product growth in the second quarter as the trade deficit widened.