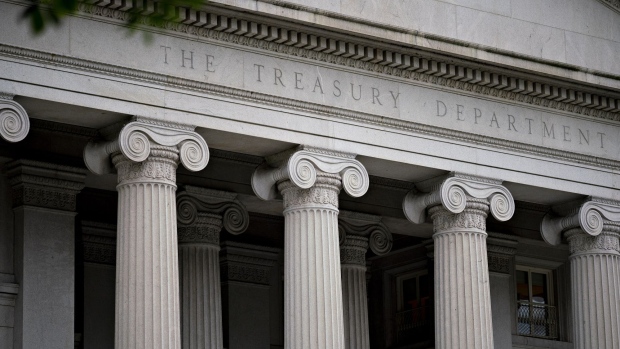 The U.S. Treasury building stands in Washington, D.C., U.S., on Wednesday, May 20, 2020. Treasury Secretary Steven Mnuchin said he plans to use all of the $500 billion that Congress provided to help the economy through direct lending from his agency and by backstopping Federal Reserve lending programs. Photographer: Andrew Harrer/Bloomberg , Bloomberg

The U.S. government will push its fundraising to new extremes this quarter to cope with a budget deficit unseen since the country mobilized to fight World War II.

The Treasury expanded its plans for borrowing at longer maturities in the coming months, saying Wednesday it will sell a record US$112 billion of securities at next week’s so-called quarterly refunding of maturing Treasuries. Over the three months through October, it will boost its offering of notes and bonds by a total of US$132 billion compared with the previous quarter, and rely more heavily on securities due in seven to 30 years.

The latest deluge of debt sales exceeded most of Wall Street’s expectations, but it’s unlikely to overwhelm the market’s appetite. Treasury officials expressed satisfaction Wednesday with continued investor demand at “record-low interest rates.” Federal Reserve buying has also helped -- it’s soaking up roughly US$80 billion of Treasuries a month, and there may be more to come.

A higher Fed tempo, as well as a tilt in purchases toward longer-dated bonds, could be unveiled as soon as next month, after the central bank conducts a review of policy objectives.

“All eyes are on the Fed” in the wake of Wednesday’s Treasury plans, said Priya Misra, head of global rates strategy at TD Securities.

Fed Chair Jerome Powell, in rare comments on fiscal policy in recent months, said he backed more spending to address the COVID-19 crisis -- and deferred a focus on deficits and debt to a later time, when the U.S. economy has recovered.

The White House and congressional negotiators are aiming for a deal by the end of this week on another coronavirus relief package, though lawmakers are still bickering over the size, with Republicans increasingly focused on the ballooning fiscal deficit. U.S. borrowing needs had already surged before the pandemic struck, thanks to President Donald Trump’s 2017 tax cuts.

The deadline for a deal this week comes after crucial aid -- including expanded unemployment benefits -- expired last month and the economic recovery slowed amid rising virus outbreaks in the Sunbelt states. The Republicans have backed a $1 trillion package, while Democrats approved a US$3.5 trillion one in the House. The Treasury penciled in US$1 trillion in additional financing needs in releasing broad borrowing estimates earlier this week.

Uncertainty over the scale and pace of government spending has made it tough to predict the outlook for supply over the coming quarters, with a much wider than usual margin of error.

“We are somewhat surprised Treasury went with such aggressive moves to the auction schedule,” Wells Fargo strategists including Mike Schumacher wrote following Wednesday’s announcement. “The Treasury supply outlook over the next few months could change on a dime.”

Regardless of the final count for the looming bill, the federal government is now shifting its debt issuance toward longer-dated securities -- after its heavy reliance on short-term debt to raise funds quickly earlier this year.

“Treasury will continue to shift financing from bills to longer-dated tenors over the coming quarters, using long-term issuance as a prudent means of managing its maturity profile and limiting potential future issuance volatility,” the department said in a statement Wednesday.

JPMorgan Chase & Co. strategists calculated recently that the average maturity of Treasury debt had declined to its shortest since 2011.

Among the issuance changes announced Wednesday:

Treasuries weakened in the wake of the announcement, and yields across the curve ended the session slightly higher. The 10-year benchmark edged up to 0.55%, widening the gap with the two-year yield to 43 basis points. Misra at TD Securities sees this move reversing in the lead up to the Fed’s September meeting, on mounting expectations for more Fed buying and doubts about the growth outlook.