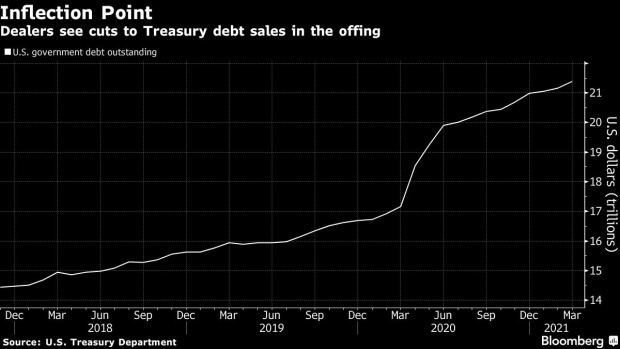 (Bloomberg) -- The U.S. Treasury kept its quarterly auction of long-term debt, planned for next week, at a record size to help fund the government’s continuing wave of stimulus spending, though it set the stage for future reductions.

The Treasury, in a statement Wednesday, offered no major changes in its strategy for issuing notes and bonds over the coming quarter, and said it will sell $126 billion of long-term securities at auctions next week. The department said sales of inflation-protected securities will rise further, amid “solid demand.”

“Continuing current issuance sizes and patterns may provide more borrowing capacity than is needed to address borrowing needs over the intermediate-to-long term,” the Treasury also said. The department said it expected to announce auction-size reductions as soon as November.

Borrowing needs are set to drop as Covid-related government relief spending subsides and lawmakers work to raise revenue to pay for multi-year spending plans for infrastructure and social programs.

The Treasury also on Wednesday reiterated Secretary Janet Yellen’s recent warning that the department faces “considerable uncertainty” about how long it can forestall a payments default, through special accounting measures, after the federal debt ceiling was reinstated on Sunday. It said it couldn’t provide a “specific estimate of how long extraordinary measures will last.”

If Congress doesn’t raise or suspend the debt limit promptly, it runs the risk of disruptions in the market for Treasury bills, a Treasury official told reporters Wednesday.

Next week’s auctions, known as the quarterly refunding, break down as follows:

Wall Street strategists have widely anticipated reductions to auction sizes, while diverging on the timing. Among the 24 primary dealers in U.S. government securities, just three expected smaller auctions during the August-to-October quarter, with many more seeing an announcement in November.

If the Treasury does proceed with a reduction in the November-to-January period, it would be the first in more than five years. Issuance had been climbing for years, thanks to surging federal budget deficits in the wake of former President Donald Trump’s tax cuts and, later, the emergency spending caused by the pandemic.

The Treasury Borrowing Advisory Committee, made up of major dealers and investors, advised that the Treasury begin cutting its quarterly refundings from Novermber, and to proceed with “modestly larger reductions” in sales of seven-year and 20-year securities. The group, known as TBAC, also endorsed going ahead with a floating-rate note tied to SOFR.

Meantime, the Treasury is currently grappling with maneuvers to avoid hitting the federal debt limit, after a two-year suspension of the ceiling ended Sunday. Economists and strategists alike anticipate Congress will act to boost or suspend the limit again before the Treasury runs out of room to avert a payments default in the fall.

Lawmakers have not yet formulated a concrete plan to avert default, which the Congressional Budget Office has warned could come in October or November once Treasury exhausts special measures and its cash pile.

Efforts to address the expiration of the debt limit suspension, could, in some scenarios, cause the outstanding stock of bills and the Treasury’s cash balance to decline to “undesirable levels,” the TBAC said.

“The Committee believes that allowing these episodes to occur, given the challenges that they pose for Treasury market functioning, is a reckless and inappropriate approach to managing fiscal policy issues,” it wrote.

The Treasury on Monday said the government will borrow almost $1.4 trillion in the second half of the fiscal year, assuming lawmakers raise or suspend the newly reinstated debt limit. The department expects to issue $673 billion in net marketable debt from July through September, $148 billion less than it estimated in May. The department sees an end-of-September cash balance of $750 billion, unchanged from from its forecast three months ago.