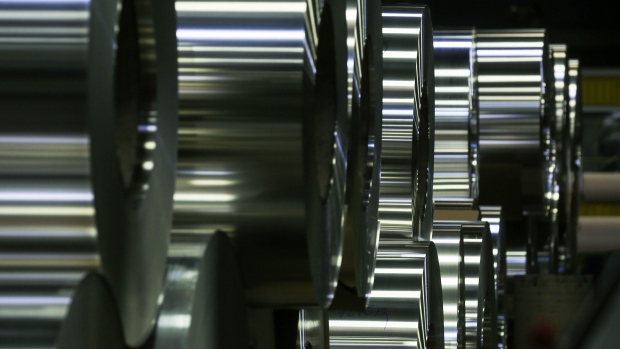 Rolls of sheet aluminum in a storage area ahead of distribution at the Impol Seval AD Sevojno plant in Sevojno, Serbia. , Bloomberg

(Bloomberg) -- The U.S. and U.K. plan this week to announce the start of talks to ease steel and aluminum tariffs that the Trump administration imposed on national-security grounds, aiming to remove a long-standing irritant in their trade relationship.

Commerce Secretary Gina Raimondo and U.K. Secretary of State for International Trade Anne-Marie Trevelyan are meeting this week and expected to announce the launch of formal talks, according to people familiar with the plan, who asked not to be identified because they don’t have authorization to speak publicly.

The negotiations will aim to resolve both the steel and aluminum disputes, the people said.

The Trump administration imposed a 25% steel tariff, along with a 10% duty on aluminum imports, in March 2018 on a range of nations, using a national-security provision in a 1962 trade law.

The negotiations with the U.K. come after the U.S. and the European Union in October brokered a deal for Washington to ease those tariffs, which had been imposed while the U.K. was still a member of the bloc. With Britain having since completed the divorce, the tariffs remain in place for the U.K.

The U.S. and EU resolved their dispute via a tariff-rate quota, a mechanism that allows countries to export specified quantities of a product to other nations at lower duty rates, but subjects shipments above a pre-determined threshold to higher tariffs.

U.S. Trade Representative Katherine Tai said last week that the issue of continuing U.S. tariffs on U.K. steel is “very much on our minds” and that the two nations would engage on talks to lift the duties “when the time is right,” without giving a timeline.

The U.S. and U.K.’s talks toward a free-trade agreement started under former President Donald Trump but have been frozen since Joe Biden took office last year. That has caused headaches for Prime Minister Boris Johnson, who has long touted a U.S. deal as one of the great prizes of the Brexit campaign he spearheaded. Proponents of leaving the EU argued it would allow the U.K. to negotiate more favorable trade terms on its own.

A deal is likely to remain elusive ahead of U.S. midterm elections in November. Biden and Democrats in Congress have signaled that they want to see the U.K. respect the Good Friday Agreement -- which turned the border between the Republic of Ireland and Northern Ireland into the demarcation between the U.K. and the EU -- before the U.S. moves forward on a trade pact with Britain. The Ireland deal has become a source of conflict in U.K. talks with the EU.