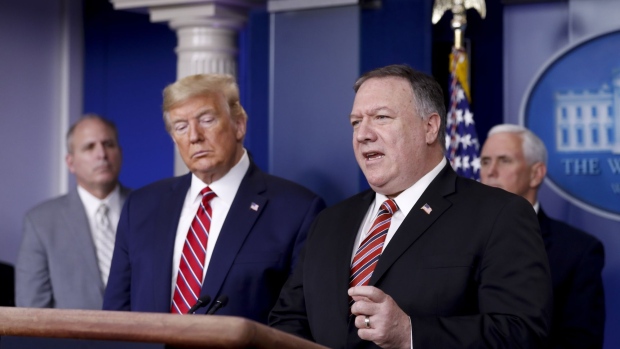 (Bloomberg) -- Secretary of State Michael Pompeo and Saudi Arabia’s crown prince discussed “the need to maintain stability in global energy markets” in what amounted to the U.S.’s most direct intervention in the price war between Saudi Arabia and Russia.

“The secretary stressed that as a leader of the G20 and an important energy leader, Saudi Arabia has a real opportunity to rise to the occasion and reassure global energy and financial markets when the world faces serious economic uncertainty,” the State Department said on Wednesday.

The two leaders also discussed their “deep concern” about the coronavirus outbreak and the need to contain the pandemic, the State Department said.

Global oil prices have plunged on the Russian-Saudi battle, coupled with the unprecedented hit to consumption from the global pandemic.

The price war was unleashed after Saudi Arabia failed to convince Russia to join the OPEC+ alliance to cut production. So far, the thinking in Riyadh remains that only a collective output cut, rather than unilateral action by the Saudis, can turn the market around.

The magnitude of the oversupply is such that Russia and Saudi Arabia would need to completely stop all their output to balance the market. Top oil trading house Vitol Group puts the glut at 20 million barrels a day.

Even as policy makers committed trillions of dollars to offset the harm from the pandemic, recent price recoveries have been short-lived. Oil futures in London fell almost 3%.

As large parts of the global economy shut down to stop the spread of the virus, neither Saudi Arabia nor Russia are showing any sign of backing down on threats to pump more oil to gain market share.

U.S. Energy Secretary Dan Brouillette said on Monday that the possibility of a joint U.S.-Saudi oil alliance is one idea under consideration to stabilize prices after the worst crash in a generation.