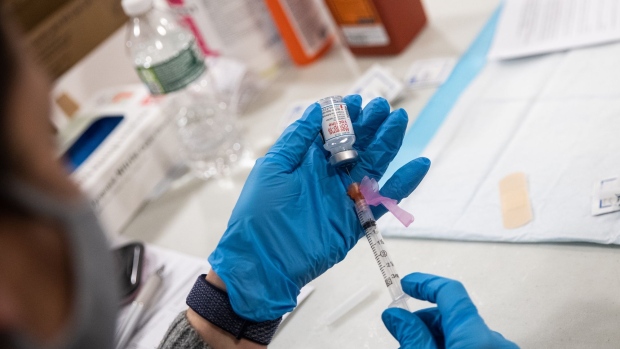 The Trump administration will encourage states to widen access to Covid-19 vaccines as part of an effort to speed up a stumbling immunization campaign.

Health officials on Tuesday will push states to expand the shots’ availability to anyone older than 65, regardless of underlying conditions that might put them at greater risk of severe disease, and anyone younger than 65 with such a condition, U.S. Surgeon General Jerome Adams said in an interview with Fox & Friends.

The U.S. also will no longer hold back second doses of the vaccine in order to make more shots available immediately, according to the Surgeon General.

“We have enough in reserve that we can just start pushing those doses out there,” Adams said.

Robert Redfield, director of the Centers for Disease Control and Prevention, will send a letter to governors making the recommendations on Tuesday, according to two U.S. officials who spoke before the decision was made public. The planned announcement, first reported by Axios, follows President-elect Joe Biden’s pledge to release more of the available vaccine supply.

Operation Warp Speed, the Trump administration’s vaccine-development and distribution initiative, had been holding back some doses of the two-shot vaccines in a bid to ensure that those who have received one can get their second.

Biden’s office last week said it would not continue to reserve doses for second shots in response to the slower-than-anticipated rate of vaccination in the U.S.

One administration official said the federal government is also sending US$3 billion to support vaccine distribution and has been offering technical assistance aimed at helping set up larger vaccination sites.

After developing Covid vaccines in record time, Warp Speed has been criticized for a sluggish start in administration of shots. Meanwhile, inconsistent public-health messaging, a maze of varying state health strategies and new variants of the virus that may be more transmissible are complicating the effort.

Still, the vaccination rate is picking up. The tally of doses administered in the U.S. rose by 1.25 million Monday, a record daily gain, to 9.27 million, according to Bloomberg’s vaccine tracker.

Some governors have already opted to open access to broader groups of people. For example, any resident of Georgia, Florida, Texas, Delaware or Ohio who is 65 or older can sign up for a shot. But other states have adhered more closely to recommendations made by a panel of CDC advisers late last year that prioritize front-line health-care workers and residents and staff of long-term care facilities. Those guidelines won’t be changed, one official said.

The patchwork of state rules has led to confusion about who is eligible to receive vaccines. While high demand has led to long lines and clogged appointment books in some states, other states have struggled to deploy the shots that they’ve received from Operation Warp Speed.

As of Monday, Alabama, Georgia and North Carolina had used only 20 per cent to 30 per cent of the doses shipped to them, according to Bloomberg’s vaccine tracker. At the same time, North and South Dakota, Connecticut and West Virginia have moved through about two-thirds of their stock.

The Pfizer vaccine is authorized by the Food and Drug Administration for use in people 16 and older, while the Moderna vaccine is for those 18 and older.