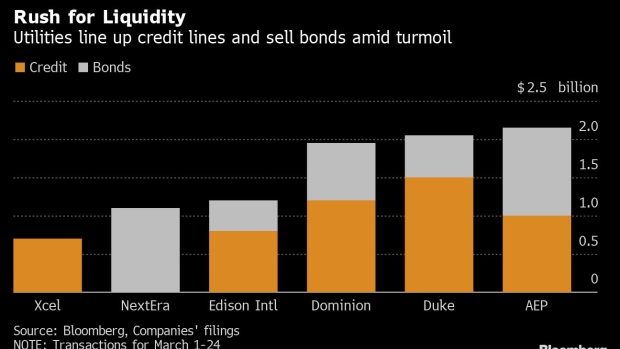 (Bloomberg) -- U.S. utilities have lined up more than $14 billion in cash and credit as uncertainty over the coronavirus strains the short-term debt market.

“We expect to continue to see utilities drawing on credit lines,” Shahriar Pourreza, an analyst at Guggenheim Securities LLC, said in a research note, citing AEP’s $1 billion credit agreement announced Monday. The move is a conservative stance to shore up funds, he said. “We do not see it in any way a sign of overall liquidity risk.”

Utilities have also benefited from their defensive nature to issue new debt as the corporate bond market has been open mostly to the highest-quality investment-grade issuers. Banks have enjoyed similar status in comprising much of the recent supply, as well as frequent telecom and media issuers including Verizon Communications Inc. and Comcast Corp.

Power and gas suppliers have sold almost $8 billion in notes this month, adding to at least $6 billion in new credit lines with banks, according to data compiled by Bloomberg.

It has come at a higher cost, as the coronavirus sell-off has sent bond prices down. NextEra Energy Inc.’s $1.1 billion sale of five-year notes Tuesday, through its Florida Power & Light subsidiary, priced at 237.5 basis points over comparable Treasuries. That’s more than twice as much as the company agreed to pay in a similar deal a year ago.

Duke was still able to lock in record-low rates in a sale of $550 million in 30-year notes. Last week the company announced it had a new $1.5 billion term loan and borrowed $500 million from an existing line.

“The majority of the funding will be used to reduce our commercial paper balances,” spokesman Neil Nissan said by email. “When the short-term funding markets return to a more stable environment, we may elect to rely on commercial paper like normal.”

Other deals include AEP’s $1 billion credit agreement, which the company will use in part to pay down short-term debt. “We took these actions to fortify our liquidity in the challenging markets,” AEP spokeswoman Melissa McHenry said by email. The company earlier this month also raised almost $1.2 billion through bond offerings.

“Yet given market volatility, Dominion Energy has taken prudent steps to increase liquidity via other financing transactions,” he said, noting that Dominion has no plans to drawn on its $6 billion master credit facility.