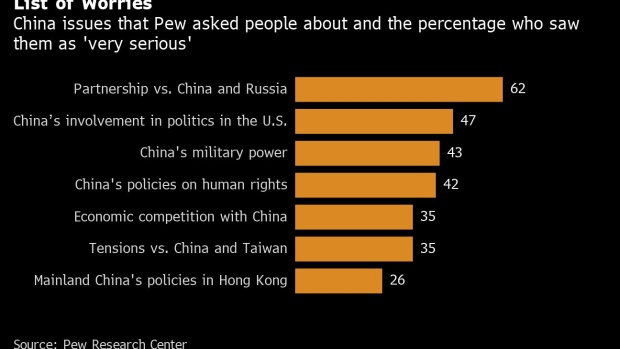 (Bloomberg) -- Americans’ negative views of China are rising as President Xi Jinping maintains close ties with Moscow during the war in Ukraine, a sign that the invasion and other issues are taking a toll on Beijing’s image.

That’s according to the latest survey by the Pew Research Center, which found that 82% of respondents had “unfavorable opinions” of the Asian nation, up six percentage points from last year. It’s also the highest since 2020, when Pew began asking the question as part of a nationally representative survey that this year covered more than 3,500 people in late March.

Survey respondents put the relationship with Moscow atop a list of worries regarding Beijing, with 62% saying it was a “serious concern.” They had a dim view of Chinese President Xi Jinping, with only 15% saying they had confidence in him to do the right thing in world affairs.

Two-thirds of respondents saw China’s “power and influence” as a major threat, and they were evenly divided on whether Washington or Beijing led the world’s top economy. “Though the relationship is viewed negatively, more than half favor taking a tough stance with China on economic issues rather than strengthening the relationship,” the report’s authors said.

The U.S. relationship remains tense after souring during the second half of the Trump administration as a trade war erupted and Washington enacted a series of tariffs on Chinese goods. The nations have also bickered over allegations of human rights abuses in Xinjiang, a crackdown on political freedoms in Hong Kong and Beijing ramping up military pressure on Taiwan.

That friction was on public display when China’s top diplomat, Yang Jiechi, harangued Secretary of State Antony Blinken in front of cameras during a meeting in Alaska last year. Beijing also regularly lashes out at Washington when lawmakers and other prominent figures visit Taiwan, trips that have become more frequent since Russia attacked Ukraine.

The margin of error for the survey was 2.3 percentage points in either direction.