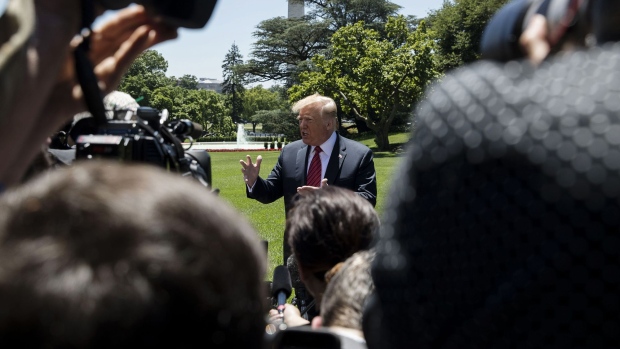 U.S. President Donald Trump speaks to members of the media before boarding Marine One on the South Lawn of the White House in Washington, D.C. on June 11, 2019. , Photographer: Sarah Silbiger/Bloomberg

(Bloomberg) -- Americans split along political party lines when it comes to President Donald Trump’s get-tough trade policy toward China, according to a new opinion poll.

More than three-quarters of Trump’s fellow Republicans approved of his imposition of tariffs on China while 74% of Democrats disapproved, an in-depth survey from the University of Maryland found.

Trump, who has slapped 25% duties on $250 billion of U.S. imports from China, is slated to meet Chinese President Xi Jinping at the June 28-29 summit of Group of 20 nations in Osaka, Japan to discuss the trade conflict between the world’s two biggest economies.

The U.S. is willing to suspend the next round of proposed tariffs on an additional $300 billion of Chinese imports while Beijing and Washington prepare to resume trade negotiations, people familiar with the plans said.

Close to two in three Republicans back the unilateral imposition of additional tariffs if China does not change its ways in response to U.S. demands, according to the poll released Wednesday.

In contrast, more than three quarters of Democrats say the U.S. should not levy more duties but work through the World Trade Organization to settle its differences with China.

The survey of 2,993 registered voters from April 10 to May 13 was conducted by the Program for Public Consultation at the University of Maryland.

The poll was unique in that respondents were given briefings on issues and asked to evaluate pro and con arguments before coming to their conclusions. The content was reviewed by experts who are trade skeptics as well proponents of trade, to assure that the briefings were accurate and balanced and that the strongest arguments were being made on both sides.

After hearing the main terms of the proposed pact to replace the North American Free Trade Agreement, 64% of Republicans favored it while 54% of Democrats were opposed.

Democrats in the House of Representatives will meet U.S. Trade Representative Robert Lighthizer on Wednesday to discuss the deal, which requires congressional approval.

On the whole, the University of Maryland survey found that large bipartisan majorities favor expanding trade though multilateral agreements.

“Americans see international trade as having both major costs and major benefits,” Steven Kull, director of the Program for Public Consultation, said in a statement. But “rather than putting the brakes on trade they favor other means to mitigate its negative effects.’’

To contact the editors responsible for this story: Margaret Collins at mcollins45@bloomberg.net, Sarah McGregor, Robert Jameson